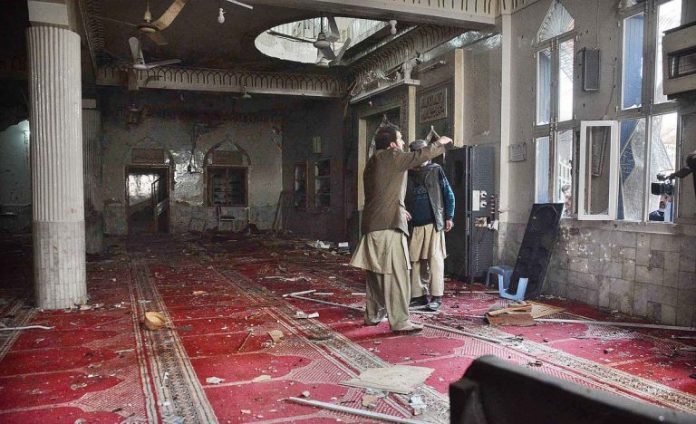 PESHAWAR: At least 57 worshipers have lost their lives, while close to 200 have been injured in a suicide bomb attack during Friday prayers at a mosque in Qissa Khwani bazaar in the Kocha Risaldar area of Peshawar on Friday, police and rescue workers told. The rescue teams have rushed the injured to Lady Reading Hospital, while residents and people of the neighbourhood also helped in transporting the injured on their motorcycles and cars. Prime Minister Imran Khan, Leader of the Opposition in the National Assembly Shahbaz Sharif, Interior Minister Sheikh Rasheed, and other political leaders condemned the blast. Police and security teams have cordoned off the area and started to collect evidence.  Inspector-General of Police Khyber Pakhtunkhwa Moazzam Jah Ansari, while speaking to journalists at the site of the incident, said that one hawaldar and a police constable were on duty outside the mosque. “The terrorist was alone and had come to the mosque on foot,” he said. “He targeted the two police personnel stationed at the mosque. One of them embraced martyrdom, while the other has sustained injuries.” Ansari added that the terrorist, after targetting the policemen, ran towards the mosque. “The terrorist first opened fire at the worshippers after entering the mosque and then blew himself up,” the IG said, adding that about 150 ball-bearings were recovered from the site of the incident. Providing further details, Ansari said that about five to six kilogrammes of explosives.
were used in the blast, which took place in the third row of the mosque. “The terrorist had worn a black outfit on purpose to conceal the explosives, Ansari said, adding that the police had an idea about a terrorist group.