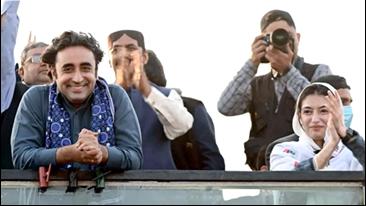 KHANEWAL :Chairman Pakistan People’s Party (PPP) Bilawal Bhutto Zardari on Friday said that our life and death is linked with the people of the country. Addressing people in the rally, Chairman PPP said that Prime Minister (PM) Imran Khan has no future in Pakistan while he soon will flee away to London. Bilawal said that PM is afraid of the masses standing in the rally. PM has been claiming that the inflation is rising all across the world and increased Rs10-12 in petrol prices on weekly basis. He added that the puppet government can not stay longer in the country, the PPP supporters will send back the incumbent government. Bilawal Bhutto, while referring to her injured sister said that Asifa Bhutto is very brave, she will be with us on the next journey. Despite being injured, Asifa is determined to join us soon. He went on to say that in the government of Shaheed Benazir Bhutto, farmers used to get full wages. The government has attacked on the economic well-being of the poor farmers of the country. The PPP leader mentioned that Urea-crisis creates economic slaughter of farmers. Due to injustice in water distribution, farmers are being killed economically. A drone camera hit Asifa Bhutto-Zardari in the face while she was standing on the container during PPP’s jalsa in Khanewal. Following the incident, Bilawal Bhutto-Zardari took his sister, Asifa, inside the container. According to initial reports, Bilawal’s security team has caught the drone operator, while Asifa is being given medical aid inside the container. The Pakistan Peoples Party (PPP) long march towards Islamabad reached Khanewal on Friday. The protest, aimed to oust the PTI government and Prime Minister Imran Khan, started in Karachi. It is being led by PPP Chairperson Bilawal Bhutto-Zardari. According to reports, Asifa has been shifted to Bilawal House Multan where a team of doctors and specialists will examine her. Following the incident, a police investigation found that the drone camera was being operated from a private channel’s DSNG van. Police said that except for two people, the rest of the staff of the TV channel has been taken into custody. Meanwhile, Bilawal Bhutto-Zardari’s security team has taken the drone operator and the engineer with them, police said.