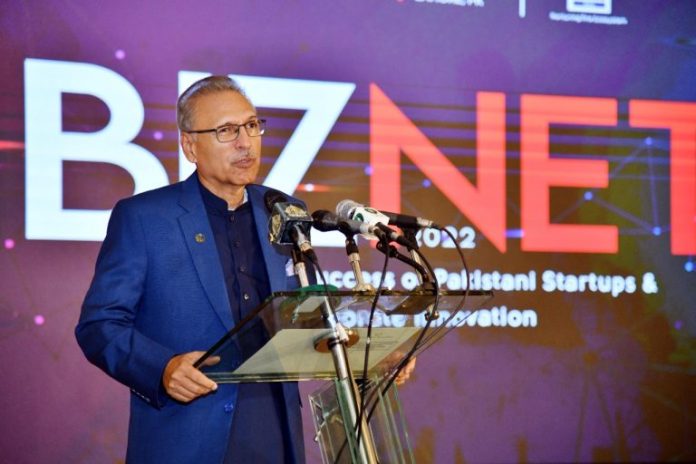 ISLAMABAD: President Dr Arif Alvi Thursday said the government was taking measures to encourage the growth of information technology startups and also ensuring their access to bank loans at low interest rates. Speaking at an event Biznet 2022 to celebrate achievements of startups in Pakistan, he said it was heartening to note that Pakistani startups were developing an ecosystem that was a democratizing experience for the online sellers and buyers. He observed that electronic commerce had changed the traditional way of conducting trade. He underlined the need for bridging the gap between decision makers, parliaments and users of information technology. It had become imperative for the developing world to take a leap forward in the age of information technology to speed up their economic progress, he added. He said that Pakistan could increase its agricultural production with the use of information technology applications. The whole world had opened up and become a market for Pakistani companies with the use of information technology, he continued. He called for further investment in upcoming technologies and startups besides investment in traditional industries. He stressed that people should be made part of the digital landscape and given the necessary skill sets to benefit from digitalization. People by acquiring different skill sets could set up small and medium size businesses with the help of information technology and could grow at a rapid pace and examples were already set by many young Pakistanis who generated considerable income with their online ventures, he told. Small and medium enterprises were the backbone for economic growth, he remarked. He said that online education should be adopted as it was more effective than the customary education in the settings of brick and mortar. He said during COVID pandemic, people had to use technologies like video conferencing and other online tools for education and businesses, which could not have happened in the normal circumstances.