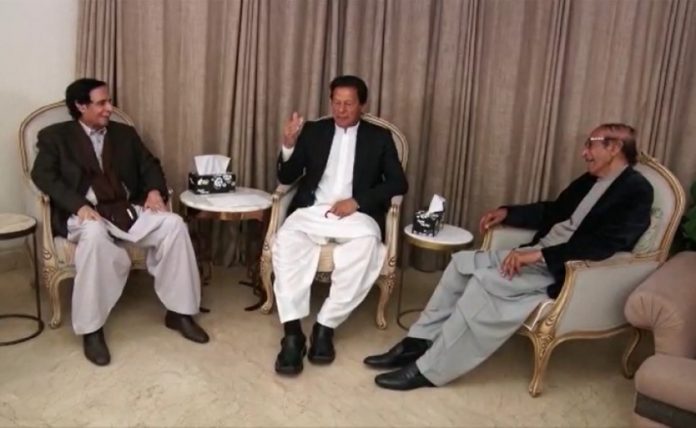 LAHORE: Prime Minister Imran Khan held a short meeting with the Chaudhry brothers of PML-Q as the Opposition targets PTI’s allies to topple the incumbent government. The prime minister’s meeting at the Chaudhry brother’s residence in Lahore — which was more than 30 minutes long — with PML-Q’s top brass, who are allies of the government in Punjab and the Centre, came as he was on a one-day visit to the provincial capital. Federal Minister for Education Shafqat Mehmood, Energy Minister Hammad Azhar, Information Minister Fawad Chaudhry, Chief Minister Punjab Usman Buzdar, and other PTI leaders accompanied the prime minister during the meeting. Apart from former prime minister Chaudhry Shujaat and Speaker Punjab Assembly Pervaiz Elahi, MNA Salik Hussain and Shafay Hussain were part of the meeting. During the meeting, the prime minister inquired about Shujaat’s health. The former prime minister thanked PM Imran Khan for visiting his house and inquiring about his health. The political leaders discussed in detail the current political situation in the country and other issues of mutual interest, a statement from the PM’s Office said. The meeting comes in light of several Opposition leaders — PML-N President Shahbaz Sharif, PPP Co-chairman Asif Zardari, and PDM chief Maulana Fazlur Rehman — holding meetings with the Chaudhry brothers in order to take them on board for their no-confidence motion against PM Imran Khan.  Earlier, during a meeting with Chief Minister Punjab Usman Buzdar, the premier directed him to take effective measures for the provision of maximum relief and ensure the delivery of quality services to the people of Punjab. PM Imran Khan further instructed Buzdar to protect the rights, lives and property of people and to take stern action against encroachers, hoarders and miscreant elements in society. During the meeting, the premier was briefed about developmental projects being carried out across the province.