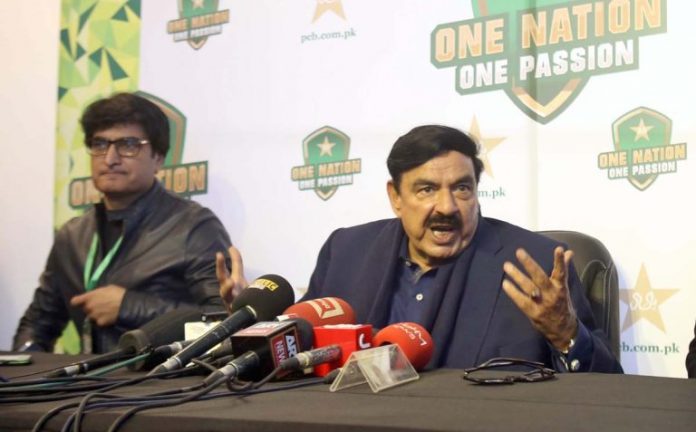 RAWALPINDI:Federal Interior Minister, Sheikh Rashid Ahmed here on Tuesday said that Pakistan has finalized foolproof security arrangements for Pakistan-Australia cricket matches. Sheikh Rashid after reviewing all the arrangements including security here at Rawalpindi Cricket Stadium while talking to media persons said that Pak Army, Rawalpindi and Islamabad police and rangers were deployed to make the security foolproof for the Australian cricket team tour. “The cricket lovers are very happy on the Australian cricket team’s tour to Pakistan. We welcome the Australian team. It’s a great honor for Pakistani nation and excellent arrangements were made by the Pakistan Cricket Board (PCB). Foolproof security arrangements have also been made by Pak Army, Rangers, Rawalpindi and Islamabad police. Best possible arrangements were finalized by the administration to facilitate the teams and the cricket lovers as well,” he added. “We are giving the Australian cricket team, the protocol of head of state. Some people especially the Indians are not happy with this tour. They did same what they had done during New Zealand tour to Pakistan. But, this time, they failed in their nefarious designs and could not achieve the target,” the minister said. “The entire Pakistani nation welcomes the Australian team to Pakistan. Pakistanis are cricket lovers. The Australian players are our guests and we would host them up to April 6,” he added. He felicitated PCB for organizing the tour. Appreciating the arrangements including security, Sheikh Rashid said that Pak-Army, Rangers, Rawalpindi district police, Islamabad Police, and administration of the twin-cities had finalized excellent arrangements for the tour.