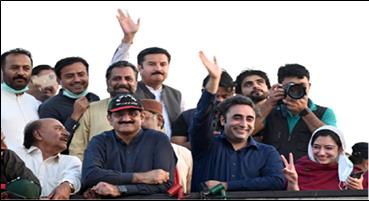 HYDERABAD:Chairman Pakistan People’s Party (PPP) Bilawal Bhutto Zardari on Monday said that Prime Minister (PM) of Pakistan Imran Khan should announce the dissolution of assemblies. According to details, Bilawal said that the PM should announce to hold the new elections in the country. Public is ready for new elections. We will bring the no-trust motion to Islamabad. Addressing the long march, the PPP Chairman said that if PM wants to talk to the country he must hold the elections today. People across the country have rejected the selected PM. He should dissolve the assemblies and return back home. Bilawal added that the sugar, flour has been stolen. Asif Zardari restored the constitution and made 18th amendments, the province of Khyber Pakhtunkhwa was identified by Asif Zardari, Iran gas pipeline was given by Zardari and the government could not complete it, and it was Benazir who brought in income support program. The PPP leader went on to say that it is the time of PM to return back home. The PM is afraid of losing his control and has sent some of his ministers to Sindh. He did injustice to all four provinces in the form of NFC award, 18th amendment and water robbery. Pakistan Peoples Party (PPP) leader and Chief Minister (CM) of Sindh Murad Ali Shah said that the party’s Chairman Bilawal Bhutto Zardari is conducting the long march against inflation and unemployment caused by this corrupt and incompetent government. While talking to the media persons, Murad Ali Shah said that PPP has launched its long march because it is high time to get rid of this incompetent government and Bilawal Bhutto Zardari will awaken the Pakistan Tehreek-e-Insaf (PTI) government from its deep sleep. He also said that the long march will reach the federal capital on March 8. He further said that the federation is depriving the provinces of their rights. The PPP leader, while criticizing the PTI government, said that they should focus on the citizens of the country instead of foul mouthing the opposition. CM Sindh also said that we will send this government packing through constitutional process. Talking about PTI’s Sindh march, he said that PTI leaders seem like they have come to Sindh on a “picnic” as their rallies contain empty chairs. PPP leader also claimed that the Prime Minister (PM) Imran Khan in his address will once again repeat his previous speeches and say that he will not spare anyone.