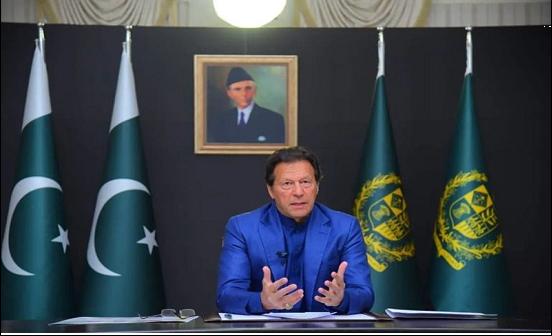 ISLAMABAD: Prime Minister Imran Khan, in a major step to protect masses from the impact of global inflationary trends, on Monday unveiled a major relief package including Rs. 10 per liter reduction in petroleum prices, Rs. 5 per unit cut in electricity tariff and some other measures. “The government has decided not to increase the prices of petrol and diesel as well as electricity tariff till the next budget,” Imran Khan said in his televised address to the nation. The Prime Minister also announced to enhance the cash assistance, provided to 8 million families under the government’s Ehaas Program, from the current Rs. 12,000 to 14,000 to help the poor people. He also announced an internship program for the country’s unemployed youth under which the youth having graduate degree would be offered Rs. 30,000 per month through a transparent and merit-based system The Prime Minister in his 40-minute speech spoke at length on various issue of national importance including the country’s foreign policy, amendment in the Prevention of Electronic Crimes Act (PECA) Ordinance, his government’s challenges and achievements including on the economic front. The Prime Minister announced 2.6 million educational scholarships and said that Rs. 38 billion will be allocated for that purpose. He also announced various incentives for the promotion IT sector including 100% tax exemption for companies and freelancers, 100 waiver on repatriation of capital and foreign exchange and elimination of capital gain tax for startups. The Prime Minister said that the investment from Overseas Pakistanis including through joint ventures will enjoy tax holiday for five years. He further said that the government will spend Rs. 460 billion for the provision of interest-free loans for youth under the Kamyab Jawan Program to start business, for low-income groups to construct their own houses and for farmers.