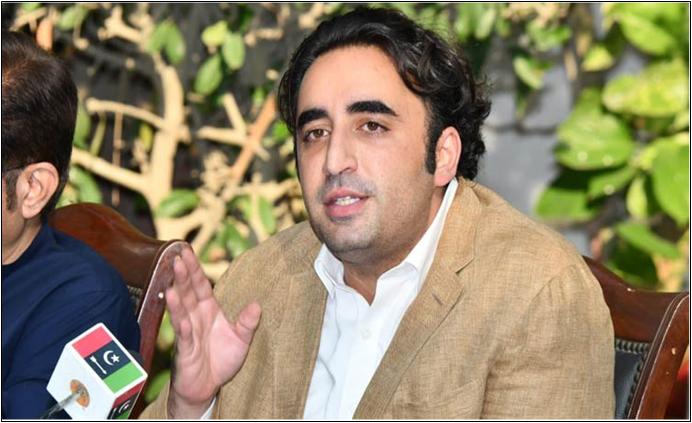 KARACHI:Pakistan Peoples’ Party (PPP) chairman Bilawal Bhutto Zardari said on Saturday that Prime Minister Imran Khan should step down so that there will be no need for opposition’s protest and no-confidence motion. Addressing a press conference in Karachi on Saturday, he said that his party’s long march will reach Lahore on March 5 and will reach Gujranwala on March 6, while the last phase of march will start from March 8. Bilawal said that the life of common man has become a hell and inflation, poverty has increased historically, adding that the PPP will fight for the rights of our people. “Sindh, Balochistan, Khyber Pakhtunkhwa and Punjab should be given their rights,” the PPP Chairman said and added the provinces are being deprived of the NFC award. Criticizing the selected government, he further said, “We have been raising our voice against PTIMF from day one. PTIMF is against the interest of Pakistan.” Bilawal said that it is the incompetence and failure of this government to make an agreement with the IMF that goes against the people. The burden of the government’s incompetence is being borne by the common man in the form of price-hike of electricity, gas bills, inflation, and uncontrolled petrol and medicines prices. He further said that we want Pakistan to come out of this deal and make a new deal which is in the interest of the country. He said that every promise of Khan Sahib turned out to be false, Imran Khan has taken U-turns on every commitment. “This government is undemocratic, but we have taken up democratic arms against it,” said Chairman PPP. “The Long March is a democratic attack on this undemocratic government.” He said the purpose of our protest is to convince the people and the members of the Assembly that the time has come where people have lost confidence in the selected Prime Minister, now the parliament should also express its distrust. “We want to show the people who stand with this puppet after the no-confidence motion is brought,” stated Chairman PPP. He further said that through protests and no-confidence motion he only wants immediate and transparent elections in the country. After the removal of Khan Sahib, the next setup will have the mandate to amend or introduce electoral reforms. All the opposition parties agree that whatever government is formed with a fresh mandate, it will have the power to get the people out of the tough times they are currently in.