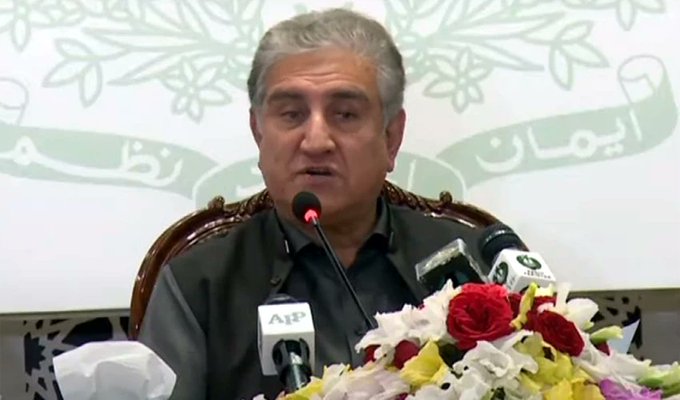 ISLAMABAD: Foreign Minister Shah Mahmood Qureshi said Friday Prime Minister Imran Khan embarked on a two-day visit to Russia after well-thought-out deliberations with government officials as he rejected criticism on the premier’s landmark tour. Addressing a press briefing regarding PM Imran Khan’s “historic” visit to Moscow, he said before PM Imran Khan visited the capital, the situation in Russia and Ukraine was reviewed at the Prime Minister’s Office where detailed consultation was held regarding the tour. Four diplomats were also present in the meeting and the route was determined after which Prime Minister Imran Khan and his delegation left for Russia. “After consultation, we decided to proceed as per our plan,” he said, adding that after the trip “our satisfaction increased and we got diplomatic space.” Qureshi said that the main focus of Prime Minister Imran Khan’s visit to Russia was enhancing energy cooperation, adding that during the trip, Pakistan emphasised on prospects of increasing bilateral cooperation in energy and trade. “We expressed interest in buying gas from Russia and for setting up an LNG terminal in Gwadar,” he said.  The minister added that a discussion was held on Pakistan Gas Stream Project. “We also expressed interest in the extension of Uzbekistan’s gas pipeline to Pakistan,” he said. Qureshi said that during PM Imran Khan’s meeting with Russian President Vladimir Putin, the two leaders discussed the situation in Afghanistan. The foreign minister said that Pakistan has defined goals in the case of Afghanistan, which is how to protect Afghanistan from the humanitarian crisis. “The third meeting regarding the Afghan issue will be held in China by the end of March,” he said, adding that Russia has also been invited to this meeting. The first two meetings in this regard were held in Islamabad and Tehran. Qureshi reiterated that Pakistan fully utilised the opportunity and raised the Afghanistan issue, saying that Pakistan’s foreign policy focuses on enhancing regional cooperation. “Kashmir issue was also discussed during the meeting,” he said, adding that the topic of islamophobia was also raised by the premier  “We have diplomatic relations with both Ukraine and Russia,” he said, adding that before embarking on Russia’s trip, Pakistan had informed the United States of its point of view. He said that Pakistan is not unaware about the international sanctions imposed on Russia.