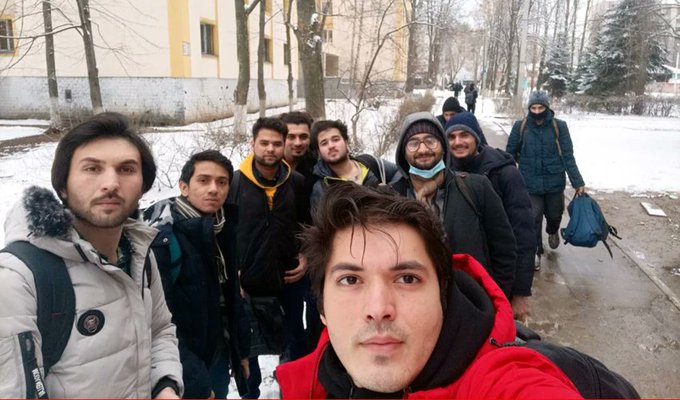 KYIV: Pakistanis studying in Ukraine have demanded the government for a safe exit from the country as tensions between Kyiv and Moscow escalate. Missiles pounded Ukraine’s capital on Friday as Russian forces pressed their advance and authorities in Kyiv said they were preparing for an assault aimed at overthrowing the government. Two Pakistani students, Aqeel-ur-Rehman and Shooban Najam, who are residing in Kyiv, have said that they are out of cash and were stuck in the capital due to the continual crossfire. “More than 20 Pakistani students have currently sought shelter in a bunker in Kyiv […] and they have run out of money,” Rehman said in a video message alongside Najam. He said they were stuck in the capital as flights were suspended and airports were nonoperational. “Our money is kept in banks and ATMs are closed, we need help.” Rehman added that all exit routes of Kyiv were closed at the moment due to the tensions. “We request the Pakistani government to evacuate us from Ukraine,” Najam said. Jawad Hafeez, another student in the capital, he had spent hundreds of thousands of rupees just a few months back to travel to Ukraine. “But now we are being asked to go back […] and I think I will have to take the decision to go back to Pakistan out of compulsion,” Hafeez said.