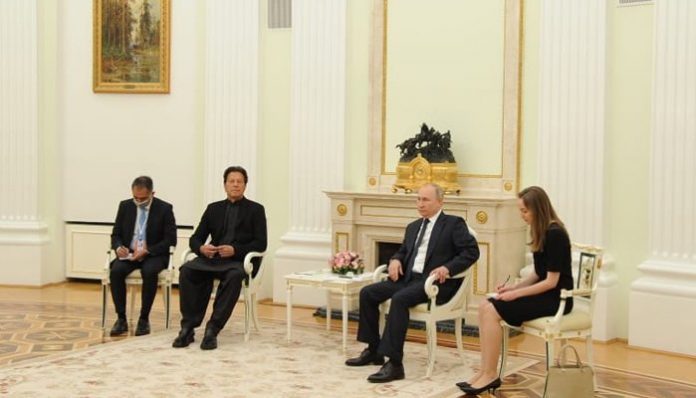 MOSCOW: Prime Minister Imran Khan Thursday regretted the latest Kyiv-Moscow conflict and said that Pakistan had hoped diplomacy could avert a military conflict, as he held a long meeting with Russian President Vladimir Putin. The president and the prime minister’s meeting lasted for more than three hours, during which they discussed Islamophobia, Afghanistan, bilateral, regional, and South Asian issues, among other “important matters”, the Russian Foreign Ministry said in a statement. PM Imran has departed from Moscow after concluding the visit. He had arrived in Moscow on a two-day official visit yesterday, where he was received at the airport by Russia’s deputy foreign minister and presented with a guard of honour at the airport. The prime minister, according to a statement from the PM Office, stressed that conflict was not in anyone’s interest and that the developing countries were always hit the hardest economically in case of conflict”Pakistan believes that disputes should be resolved through dialogue and diplomacy,” the prime minister told the Russian president. Recalling the telephone conversations during the recent months between the two leaders, the prime minister expressed confidence that the positive trajectory of bilateral relations will continue to move forward in the future. He added that the trust and cordiality marking the relationship would translate into further deepening and broadening of mutual cooperation in diverse fields.