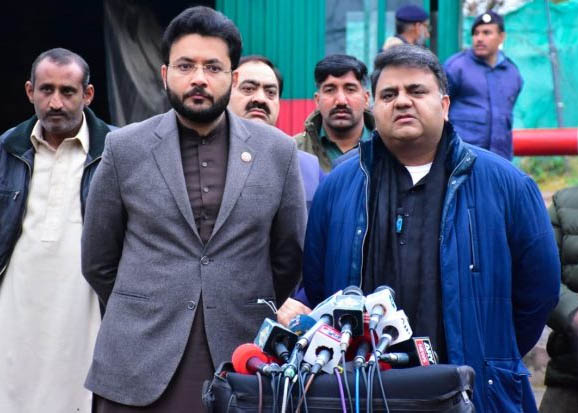 ISLAMABAD, Feb 23 (APP): Minister for Information and Broadcasting Chaudhry Fawad Hussain on Wednesday said the opposition had opted for a foul play by offering ‘bribe’ to some Pakistan Tehreek-e-Insaf (PTI) MPs for their support to a no-trust motion against the Prime Minister.

Fawad told the media that at least three of PTI MNAs including a female member and one from minority group, had formally reported to the Central Executive Committee (CEC) that they were offered ‘bribe’ for changing their loyalties during no-trust move.

Flanked by Minister of State for Information and Broadcasting Farrukh Habib, he said the matter came under discussion at the CEC meeting which met to take stock of the opposition’s planned no-trust move, visit of the prime minister to Russia and the upcoming local government elections.

He termed the opposition’s bid for bribing the PTI MPs “ extremely shameful” and vowed to foil their tactics to once again reactivate “horse-trading” in the politics.

Fawad lauded the PTI Members of Parliament (MPs) for reposing confidence in the party leadership.
He said the opposition’s bid to bribe these PTI MNAs was evident enough to expose the agenda of the meeting of two “big dealers” in Lahore on Tuesday night.

They were apparently in a state of panic and stress due to corruption cases in the courts, he said.
He said Shehbaz Sharif was roaming free as his case was not being heard on day-to-day basis and may face consequences once daily case hearing was initiated.

Fawad said the two leaders submitted medical certificates in the courts, but ironically, both had a formal meeting in Lahore to discuss arrangements for purchasing the loyalties of MPs.

He said it had been a week since the opposition announced to bring no-confidence motion, but they still had to decide its final date.

“I challenge them to bring the no-confidence move in the next 24 hours to see what will happen afterwards,” he said, adding the opposition did not have the guts to carry out its plan.

He said the government was moving in the right direction as the economy was on upward trajectory, despite multiple challenges.

He said substantive relief packages would be announced to ensure relief for people due to inflation at world level.

As regards the prime minister’s visit to Russia, he said in the prevailing global scenario, it had become most significant since the world would be focusing on Moscow — the meeting venue of Russian President Vladimir Putin and Prime Minister Imran Khan.

In an interview with Russian television the other day, the prime minister elaborated main features of foreign policy, categorically stating that Pakistan would not be part of any block.

After decades, Fawad said Pakistan was fully ensuring its sovereignty under the dynamic leadership of Prime Minister Imran Khan.

He also recalled Pakistan’s key role after withdrawal of foreign troops from Afghanistan, which was duly acknowledged by the world community.

The minister said Pakistan had advised former Afghan President Ashraf Ghani to opt for dialogue and inclusive government in the war-torn country.

About current situation in Afghanistan, he said Pakistan was focusing on the humanitarian crisis as Afghans were facing severe shortage of edibles and food items.

Fawad said oil prices in international markets had touched $100 per barrel due to the prevailing issues between Russia and Ukraine, eventually affecting the whole world including Pakistan.

He pointed out the 40 percent wheat share of Russia-Ukraine of global produce, and added “if the tension continues, it may lead to the food crisis in the world.”

In the given scenario, he said, Pakistan wanted to move forward with a balanced approach to sort out the issues.

Referring to the PM’s recent China visit, the minister said Pakistan’s delegation was given warm receptions by the Chinese President and Premier, and eventually China Pakistan Economic Corridor (CPEC) would get a boost.

In view of these success stories, he said world figures like Bill Gates, co-Founder of Microsoft, visited Pakistan that was a good sign for the country.

To a question, Fawad said a specific law may be discussed in an open manner to effectively check misuse of different legal options.

He said defamation was dealt under the civil law and added false accusation and maligning, were well-defined under Islamic laws with strict penalties.

Referring to the Surah Al-Nissa of the Holy Qura’an, the minister said leveling false accusation against women had stringent penalty.

To another query, the minister said PML-N leader Maryam Aurangzeb was apparently in panic and issuing a statement, with the approval of Shehbaz Sharif and Nawaz Sharif, was an attempt to create division among the state institutions.