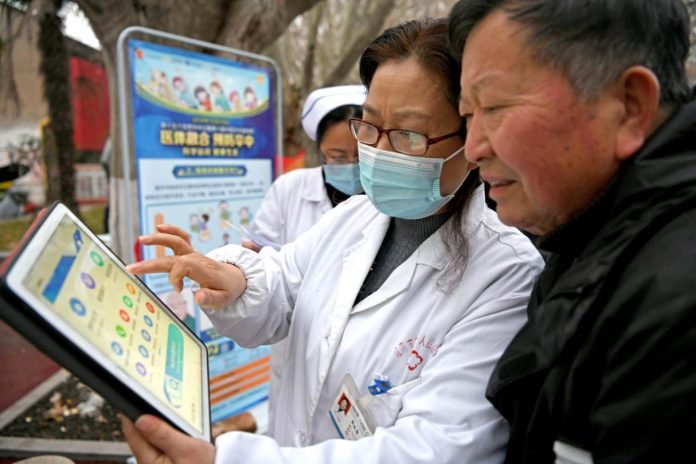 By Shen Shaotie, Chang Biluo, People’s Daily
Internet hospitals have been embracing rapid development in China over the recent years. Back in 2018, there were only about 100 such facilities across the country, while the figure now exceeds 1,600.
These online hospitals offer click-and-mortar medical services. Integrating subsequent visits, follow-up visits and medical consultation services, they allow patients to enjoy medical services without stepping out of their homes.
A man surnamed Li from Chaoyang district of Beijing always visits Xuanwu Hospital affiliated to the Capital Medical University via the hospital’s mobile application, to have prescriptions refilled for his octogenarian father who suffers from cerebrovascular disease and has to take medicines regularly to prevent cerebral infarction.
According to Chen Fei, doctor-in-charge with Xuanwu Hospital’s neurology department, he has given a dozen prescriptions to Li’s father.
“I used to ask for a half-day leave before going to get the medicines prescribed for my father, which was both tiring and time-consuming,” said Li, adding that the internet hospital is convenient as he can have the medicines prescribed through his mobile phone and delivered to him on the next day.
As a specialist in carotid artery stenting, Chen is always on full schedule, which makes it hard for patients to see him in his office. Thanks to the online hospital, all patients now have the opportunity to make an appointment to meet him online.
“Most of my patients need subsequent visits and prescriptions on a regular basis, and they can keep in touch with me through the online hospital anytime and anywhere ,” he said.
Chen Qiulin, deputy director of the Health Industry Development Research Center at the Chinese Academy of Social Sciences, told People’s Daily that internet hospitals can improve the accessibility of medical services and lower the cost for patients.
To further exploit the advantages of online medical services and benefit more patients, Chongqing University Three Gorges Hospital (CUTGH) in southwest China’s Chongqing municipality has connected village clinics to its internet hospital.
“Sometimes we would consult with the doctors from CUTGH on the cases we are unsure of,” said Li Xiaojian, a doctor in the clinic of Guanba village, Chongqing’s Wanzhou district, adding that such services have greatly facilitated the villagers.
CUTGH president Zhang Xianxiang told People’s Daily that the hospital will keep extending the reach of its online medical services, so as to bring home health care services to more patients.
Besides, the hospital will also collaborate more with pharmacies and village clinics and deploy more internet hospital terminals in neighboring districts and counties, Zhang added.
Internet hospitals are making medical services more accessible for patients in critical and complicated conditions.
For instance, Mr Wang in Jinzhai county, east China’s Anhui province suffers from rheumatoid disease, and his condition got worse recently. The progression wasn’t controlled even after he was hospitalized. In less than two days, Wang became unconscious and he refused to go through checkups.
To deal with the situation, Wang’s doctor contacted Chen Xiaoping, deputy director of the endocrinology department of the Beijing-based China-Japan Friendship Hospital (CJFH), via a telemedicine platform. After Chen held a joint consultation with experts from his hospital, Wang was diagnosed with brain damage led by severe hyponatremia and mild infection in the lungs. Thanks to the joint consultation, Wang soon recovered after going through systematic treatment. He can even do farm work now.
Cui Yong, vice president of the CJFH introduced that combining telemedicine and internet-based medical consultation is a highlight of the CJFH’s internet hospital, which can both improve medical capability at primary level and better facilitate the people.
Telemedicine is mainly for patients in critical and complicated conditions at primary-level medical institutions, while internet-based medical consultation is offered to patients on subsequent visits who could miss the prime time for treatment once their situations worsen if they can’t make it to big hospitals in time.
The combination of telemedicine and internet-based medical consultation is able to timely detect and deal with new symptoms developed by patients and thus better guarantee their health.
So far, the CJFH has been connected to nearly 6,000 medical institutions across the country via its internet hospital system, including 580 offering integrated elderly care and medical services. A total of more than 13,000 remote consultations have been carried out.