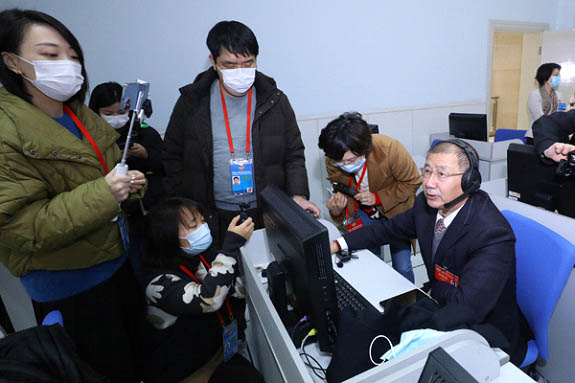 The country’s local “two sessions”, the annual meetings of lawmakers and political advisors at various levels, recently kicked off across the country, bringing to the spotlight all kinds of applications of digital technologies that have brought new experiences and created new platforms for deputies to local people’s congresses and members of the CPPCC local committees in fulfilling their duties.

Thanks to an upgraded digital proposal system, Shanghai’s municipal-level political advisors are able to get timely and accurate information about various industries and departments conveniently via a data-based digital platform.

In east China’s Zhejiang province, provincial-level lawmakers can now learn about the status of their proposals and suggestions in real time through an office automation app; and members of the CPPCC Zhejiang provincial committee are able to obtain information about government affairs, track the handling of proposals in real time, and later get feedback on their work on an online platform.

The vigorous development of digital technologies in recent years has speeded up the informatization of local “two sessions”.

In the past, people can only reach deputies to local people’s congresses via phone call or at local legislators’ liaison stations. Now in Xihu district, Hangzhou city, Zhejiang province, residents can chat with local legislators online via mobile phones.

Thirty-four members of the Hunan provincial committee of the CPPCC from Hong Kong and Macao, who couldn’t attend this year’s session due to the COVID-19 pandemic, expressed their opinions about helping Hunan integrate into the construction of the Guangdong-Hong Kong-Macao Greater Bay Area online.

From digital proposals to deliberation of state affairs online and remote consultation, it is evident that fulfilling duties via online means becomes increasingly prevalent among China’s lawmakers and political advisors.

Digital and information technologies help lawmakers and political advisors better fulfill their duties in accordance with the law and can comprehensively improve their competence.

Topics concerning people’s wellbeing attract the most attention from deputies to people’s congresses and CPPCC members during this year’s local “two sessions”, whether online or offline. The people’s congress of Shapingba district in southwest China’s Chongqing municipality has leveraged both online and offline means and used mini-programs to expand channels for seeking legislation advice from the public.

Yang Zhaoxia, a member of the Beijing municipal committee of the CPPCC, considers good ideas from the people the “golden key” to her execution of duties. Her proposals for transforming manhole covers on sidewalks which can easily cause pedestrians to sprain their ankles and disposing abandoned bikes are both based on the suggestions from the people.

As new technologies and old traditions converge on discussions about people’s concerns, difficulties and urgent needs, China’s people-centered development philosophy is passed on by digital technologies and practiced through concrete endeavors.

Digital technologies have been brought into full play by China’s lawmakers and political advisors in maintaining close ties with the people, listening to their voices and responding to their expectations.

East China’s Shandong province launched a campaign to encourage residents from all walks of life to make suggestions for the provincial government’s work under 22 topics, including employment and entrepreneurship, education, and health. Media outlets of southwest China’s Guizhou province have invited netizens to interact with deputies to people’s congresses and CPPCC members online.

It’s believed in China that making the most of the Internet for the expression of people’s views, ideas, worries and concerns and promoting communication between the people and lawmakers and political advisors through both online and offline democratic channels so that work benefiting the people can actually proceed and yield fruits is a major task of democratic construction.

The efforts of various regions across China to leverage Internet-based means to seek people’s advice during the local “two sessions” are the epitome of China’s socialist democracy that covers all aspects of the democratic process and all sectors of society—a true democracy that works.

China’s socialist democracy with Chinese characteristics is marching toward a brighter future as the country continuously increases its lawmakers’ and political advisors’ competence and the efficiency in their execution of duties via online means, integrates new technologies and models into democratic and scientific decision-making, smoothens the channels for the people to express their ideas, and forms a synergy for improving people’s well-being.