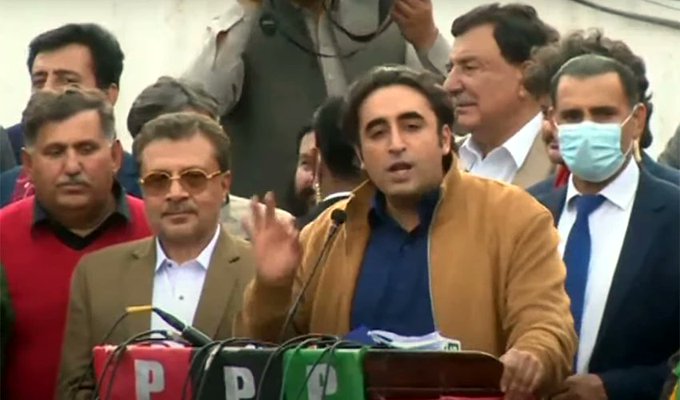 PESHAWAR : Chairman Pakistan People’s Party (PPP) Bilawal Bhutto Zardari on Monday said that the no-confidence motion signals the victory of PPP. According to details, he said that those who did not support the no-confidence motion have now joined us in the motion. Earlier, they were not united over the decision of no-confidence motion, but now they are on the same page with us. Addressing the workers convention in Peshawar, Bilawal Bhutto added that his party will hold the long march on February 27. This will be the biggest march in the history of Pakistan. We should inform the public about the strategy of PPP’s long march. The PPP Chairman said that his party is a democratic party and our supporters tolerated Zia-ul-Haq, Yahya Khan, Pervez Musharraf and the selected PM. We have asked our supporters to compete with the PM Imran and obtain victory in all elections. Now we have decided to hold long march and it will be a victory. Bilawal said that PM had announced to give answers of all questions in National Assembly and he did not come to assembly after that day. He went on to say that corruption is rising sharply in Khyber Pakhtunkhwa (KP) and Punjab. And it has been identified by Transparency International (TI) which announced that in PM Imran Khan’s reign, the corruption culminated above all previous records. The public is passing through a historic economic crisis. The PPP leader said that every promise of government turned out to be mere falsehood and deception. PM Imran regularized his own house after snatching the roof of poor public.