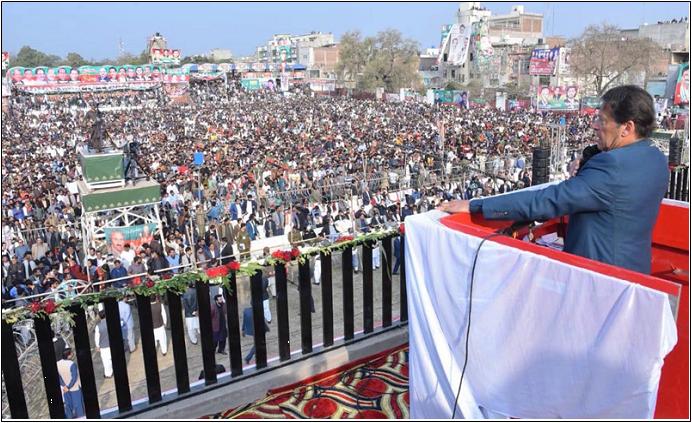 MANDI BAHAUDDIN: Prime Minister Imran Khan on Friday said that letting PML-N supremo Nawaz Sharif leave Pakistan was a “major mistake” of the incumbent government. In order to counter the Opposition’s efforts to bring a no-trust motion, the prime minister has kicked off his PR campaign today, with the first public rally being held in Mandi Bahauddin. The ruling party had announced a mass contact campaign to mobilise the party at the grassroots level after the Opposition parties started contacting the PTI allies seeking support for the no-trust motion. The prime minister, addressing the rally in Mandi Bahauddin, lashed out PML-N, PPP, and other Opposition parties for “looting the country’s wealth and stashing their money abroad”.Turning his guns towards PML-N President Shahbaz Sharif, the premier said that he had a “weak heart and knew he would not be able to escape if his case (of being a guarantor in Nawaz Sharif’s case) is heard”.”If Shahbaz Sharif is innocent, then why is he running away from courts?” the prime minister questioned. The prime minister said since he did not run away from the court whenever he was summoned and provided every document that the judiciary demanded. “Why are you (Shahbaz) running away from courts? Ask for a day-to-day hearing,” he advised the leader of the Opposition. Taking a jibe at PML-N Vice President Maryam Nawaz, he said Nawaz’s daughter claims she has “tapes” on government officials “Have you ever heard a politician blackmail (others) via tapes,” he asked. PM Imran blamed PML-N for the “fake” audio tape that was made against former chief justice Saqib Nisar and said politicians do not indulge in such activities rather it was what “mafias” do. “Maryam bibi is threatening judges […] she wants an early dismissal of the incumbent government,” he said, noting that he would keep fighting the corrupt elements till his “last breath”.The premier said the PML-N — and the Opposition as a whole — wanted an NRO from him, similar to the one former dictator Pervez Musharraf gave them.  “Till they return the nation’s money, I will not spare them.” “I have a message for the Sharif family: The captain is ready for all your plans. You will not only face defeat, but all of you will go to jail,” the prime minister vowed. The prime minister said when bombardments were taking place during the “war on terror”, those in the Opposition now were tight-lipped on the matter back then. “They were quite as their property and money were stashed abroad […] they were their slaves,” the premier said. The prime minister reiterated he had no personal enmity with the Opposition leaders and that he was only fighting against them as he wanted a prosperous Pakistan. The prime minister also admitted that inflation was rising in the country, but he mentioned that he was always thinking of ways to get the nation out of this crisis. “The journalist fraternity is aware of the reason behind the rising inflation. After coronavirus, the supply lines were suspended, and as a result, the price of commodities shot up,” he said. PM Imran said the per barrel cost of petrol had risen from $40 to $90, and when the government reduces duties on the commodity, it faces losses worth Rs70 billion. “I promise to reduce the burden on the people.” The prime minister claimed inflation during the PTI’s government was less when compared to PPP and PML-N. He noted there was historic inflation in the United Kingdom and the United States — and Pakistan was no exception. “I promise (were are trying) that the burden does not fall on you; we are trying. Out exports, tax collection, and foreign remittance have hit record highs,” he said. The premier said for the first time, IT exports have risen by 70%.He said for the first time, health insurance worth Rs1 million was being provided to each family, which would allow them to get their loved ones treated for free.