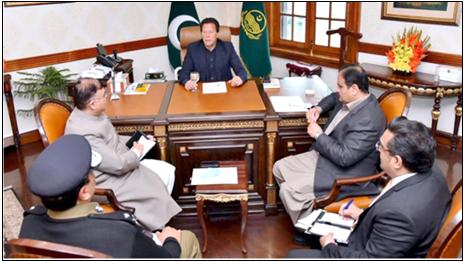 LAHORE :Prime Minister Imran Khan said on Wednesday that Pakistan Tehreek-e-Insaf (PTI) will win local body elections and decisions regarding awarding tickets should be taken with consensus. The Prime Minister, who was on day-long visit to Lahore, called on the members of the Lahore Division Assembly, during which the members of the Assembly expressed reservations regarding the delimitation of local bodies. Most of the members of Lahore and Sargodha complained about the delimitation by the Election Commission. The prime minister directed the members to file objections before the ECP within the stipulated time and said that the party organization and the members of the Assembly should work together in the local body elections. Earlier, PM Imran Khan presided over a meeting of the members of the assembly from DG Khan Division. During the meeting, the elected representatives gave suggestions over local body elections. They also requested to expedite the recruitment process. Complaining about the provincial education minister, the lawmakers said that Murad Ross s attitude towards the assembly members was not appropriate and it takes around six months to install an electricity meter. On the occasion, the PM said that the members of the assembly should make full preparations for the local body elections. He said that this time the decision regarding awarding tickets should be taken with consensus. Imran Khan also directed party members to prepare for the local body elections jointly, adding that Inshallah we will win the local body elections in Punjab. Imran Khan on Wednesday directed the Punjab government to take all necessary steps in providing prompt and efficient services to the common man in the province. Talking to Punjab Chief Minister Sardar Usman Buzdar, he also emphasized taking action against miscreants, hoarders, and occupation mafia to protect the lives, property, and interests of the people. During the meeting, the issues related to civil administration and law and order of Punjab province were discussed, besides a detailed briefing on the progress of development projects. Chief Secretary Punjab Kamran Ali Afzal and Inspector General Punjab Rao Sardar Ali Khan were present.