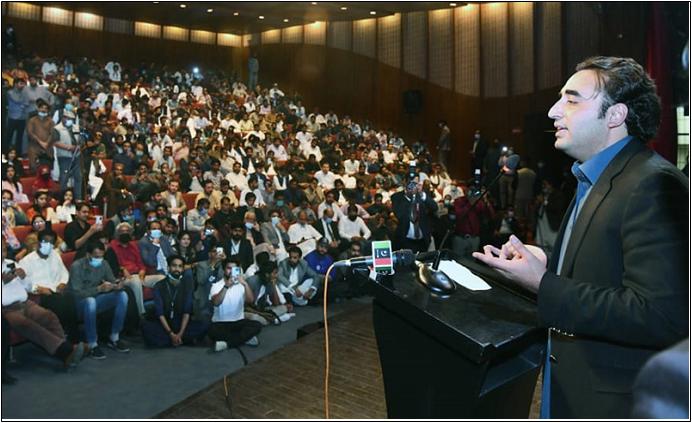 KARACHI: PPP Chairman Bilawal Bhutto-Zardari Wednesday demanded the restoration of student unions across the country after Sindh passed a bill to restore the bodies. “A new leadership will emerge through this nursery […] as student unions played an integral part in ending the dictatorship. The role of students in the struggle against (dictator) Zia-ul-Haq was historic,” he said while addressing an event in the provincial capital. Emphasising the need for students unions, he said hatred and extremism were on the rise in society and this was due to the absence of students unions — which were banned during former dictator Gen Zia’s tenure, almost four decades back. Bilawal said fees were increasing in educational institutions across the province and harassment of students was also on the rise. The PPP chairman said that with the revival of these unions, whenever harassment incidents would be investigated, students would have their say in the matter and when an educational institution would consider a fee hike, they would have to ask the students first. The provincial assembly unanimously passed the Sindh Students Union Bill, 2019, last week, which gave representation to students in educational institutions’ syndicate, senate, and anti-harassment committees. The bill mentioned that no student would be allowed to use or keep weapons on campus, adding that educational institutes will decide the rules and regulations related to the union two months after the bill is passed Turning his guns on the government, Bilawal said an “illegitimate, inept, and incompetent” regime had been “forced on the people”, which had caused a crisis of poverty, unemployment, and inflation. “An attack was launched on Pakistan’s economic prosperity,” the PPP chairman said. Bilawal added PPP would march to Islamabad from Karachi on February 27 in its bid to oust the incumbent PTI-led government.