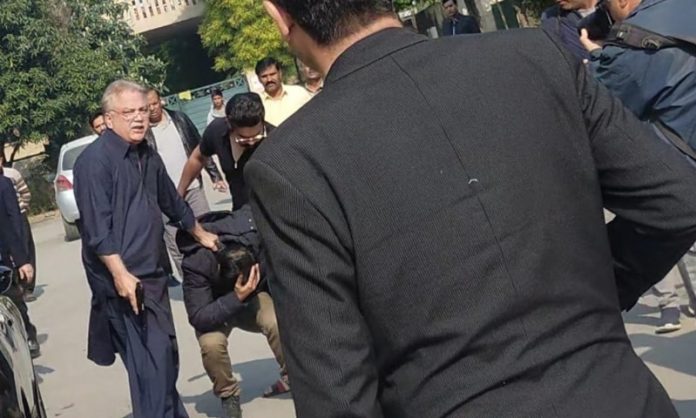 ISLAMABAD: A court in Islamabad Wednesday declared Federal Investigation Agency’s (FIA) raid at journalist Mohsin Baig’s residence illegal, hours after he had been arrested. “…illegal raid was conducted at the house of [Baig] by irrelevant persons who were not authorised to do so,” Additional Sessions Judge Islamabad West Zafar Iqbal said in the judgement of a petition filed against the journalist’s arrest. In the five-page judgement, the additional sessions judge noted that the first information report (FIR) against Baig was lodged at an FIA cybercrime reporting centre of the agency in Lahore on behalf of federal minister Murad Saeed. Another FIR was registered against Baig, his son, and seven to eight other people on the complaint of the station house officer (SHO) of the Margalla police station. In the FIR, the SHO alleged that police arrived at the site of the incident after they received a “wireless message” from the FIA at 10:30am, saying that the body had reached Baig’s house to arrest him. As the FIA team tried to arrest Baig, he, his sons, and seven to eight other people started resisting the arrest and fired aerial shots, the police officer alleged. As a result, the FIR was lodged against them, he said. In response to this, the court said the SHO, in the FIR, mentions that the first FIR was lodged at 9am and an investigation team departed from a police station at 9:30am, whereas the alleged incident took place at 10:30am. As the incident occurred in Islamabad, the court said it was “crystal clear” from the peculiar facts that no raiding party had departed from Lahore.The court mentioned that the SHO just produced the record of his own FIR, which is “devoid of any police diary, statement, of any person recorded […] and recovery memo of crime empties fired by the accused party”.The court asked the police to conduct a proper inquiry and interview relevant people in the case as it noted that the SHO “registered the FIR just for showing fake efficiency.” The court, however, dismissed the plea and said the case was presented before an anti-terrorism court (ATC), which would decide the further course of action against the journalist. Leader of the Opposition in the National Assembly Shahbaz Sharif, PPP Chairman Bilawal Bhutto-Zardari, PML-N Vice President Maryam Nawaz, journalistic bodies, and others have criticised the arrest.