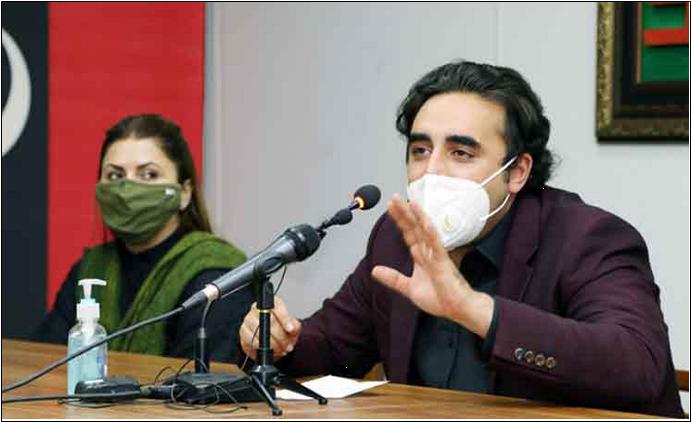 KARACHI : Chairman Pakistan Peoples Party (PPP) Bilawal Bhutto Zardari on Tuesday expressed satisfaction over the unity of all opposition parties on no-trust motion. Under the chairmanship of Bilawal Bhutto Zardari, a meeting was held at Bilawal House. The meeting was attended by members of National and Provincial Assemblies from Sindh. The meeting was also attended by Faryal Talpur and Chief Minister Murad Ali Shah while former Sindh Chief Minister Syed Qaim Ali Shah, Aftab Shaban Mirani, Nawab Yousuf Talpur, Manzoor Wasan and others were also present. Bilawal was briefed about the preparations for the long march. Chairman PPP assigned separate important tasks to the members of Sindh Assembly. PPP CEC meeting decided to hold long march keeping in view democratic principles. Addressing the public, the PPP leader said that we believe in the democratic, constitutional and peaceful aspect of no-confidence motion and expect a change of government. He went on to add that other opposition parties are supporting our position on the no-confidence motion. The PPP has been the most effective opposition since day one. Pakistan Peoples’ Party (PPP) on Tuesday announced schedule for the February 27 long march. According to the schedule, the long march will start from Mazar-e-Quaid February 27 and will stay in Sukkur for the first night. The convoy will be hosted by Khursheed Shah, PPP leader and Member National Assembly. A rally will also be held in Sukkur to which Bilawal Bhutto will address. The long march’s next stop would be Rahim Yar Khan on February 28, while the anti-government march will reach Multan on March 1 where former prime minister and Leader of the Opposition in the Senate Yousuf Raza Gilani will host the convoy. On March 2, the PPP march will reach Chichawatni Tehsil of Sahiwal where it is planned to gather 100,000 people. On March 3, the long march will reach Lahore where several rallies will be held. The convoys will then make a stop in Wazirabad on March 4. The PPP’s long march will reach Islamabad on March 6.