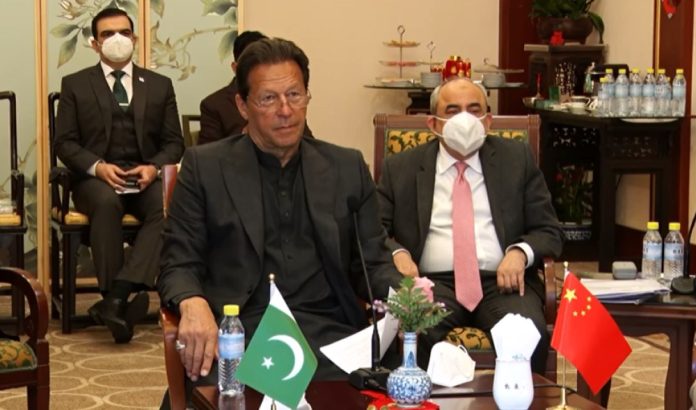 BEIJING: Prime Minister Imran Khan on Friday invited Chinese companies to invest in Pakistan and benefit from the business-friendly policies of the PTI-led government. During a series of meetings with the executives of Chinese state-owned and private corporate sectors, the premier highlighted that Pakistan was offering a conducive environment for investment in Special Economic Zones (SEZs) under the China Pakistan Economic Corridor (CPEC). In his remarks, PM Imran Khan appreciated the keen interest of the Chinese companies to invest in Pakistan. On this occasion, Chinese corporate leaders briefed the premier on the progress of their ongoing projects in Pakistan. They evinced keen interest in expanding investments in projects related to recycling of metals and paper, energy, textile, fibre-optics networks, housing, dairy and water management. The executives who met the prime minister included leadership of China Communication Construction Company (CCCC), Huazhong Technology, Zhejiang Seaport Group, Challenge Apparel, Hunan Sunwalk Group, Royal Group, China Road and Bridge Corporation (CRBC), Zhengbang Group and China Machinery Engineering Corporation (CMEC). The premier was joined in the meetings by federal ministers, advisers and senior officials. Prime Minister Imran Khan will visit the Olympics village to attend the opening ceremony of the Olympic Games Beijing 2022, to represent Pakistan at the event today, Federal Minister for Information and Broadcasting Fawad Chaudhry said Friday. A delegation comprising over 20 Pakistani ministers and officials will accompany the premier at the Olympics opening ceremony. In a statement issued on Twitter, Fawad said that the purpose of PM Imran Khan’s visit to China is to represent Pakistan in the Beijing Winter Olympics.
and convey goodwill gesture at its opening ceremony on Pakistan’s behalf. Fawad, who is accompanying the premier on his visit to China, briefed about PM Imran Khan’s engagements for the first day of the tour. He said that the premier will also meet Chinese industrialists and businessmen on the sidelines of the visit, after which different industrial units will shift to Pakistan.