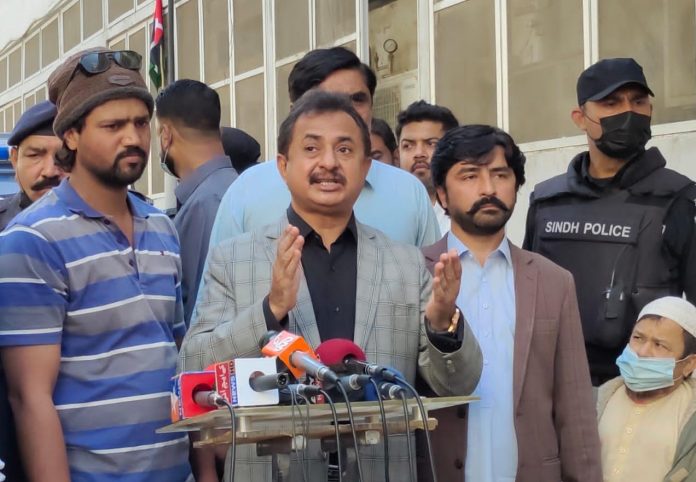 KARACHI:Leader of the Opposition in the Sindh Assembly Haleem Adil Sheikh has moved before the Sindh High Court (SHC) with a plea seeking order to form a Joint Investigation Team (JIT) on the report prepared by SSP Dr Muhammad Rizwan. Haleem Adil Sheikh said that SSP Dr Rizwan through a report during his posting as SSP Jamshed Town Karachi had disclosed the connections and patronage of the drug traffickers by Sindh Minister Saeed Ghani and his relatives. The Opposition Leader in the Sindh Assembly along with his counsels has filed the petition to SHC with a plea to form JIT on report of SSP Dr. Rizwan. Haleem Adil Sheikh has also submitted the statement of Saeed Ghani’s colleague Hamidullah Pathan as video evidence. Later, while talking to media along with lawyers, Haleem Adil Sheikh said that he has no grudge with Saeed Ghani. He said that he has no grudge with Saeed Ghani and his petition is only meant to protect the young generation of Sindh. He said that the important officials of the Sindh government who are responsible for the protection of life and property of the people are the ones who are involved in these heinous activities and they are supporting the drug dealers. He said that a few days ago, the Special Branch reported that there are thousands of drug peddlers who are being supported by the police. He said that district Malir has become a stronghold of drug dealers. Drugs is being sold openly in different areas including Ibrahim Haideri, Rehri Goth, Lyari, Essa Nagri and educational institutions, he added. Haleem Adil Sheikh said that when SSP Dr Rizwan was posted as SP Jamshed Karachi, a disclosure was made in a report about a network of drug trafficker under the patronage of Saeed Ghani. Later a committee was formed by the Sindh Government that gave a clean chit to Saeed Ghani.