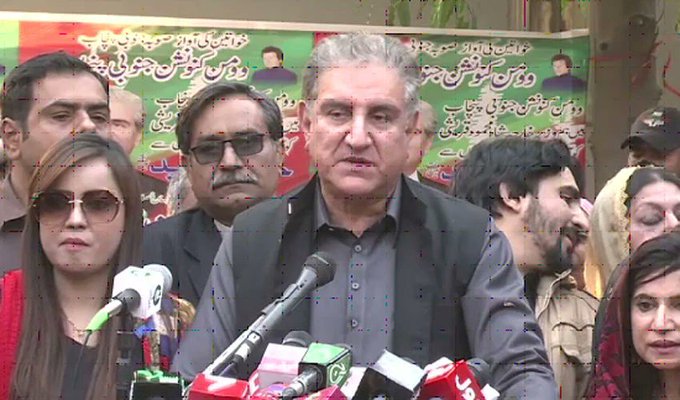 MULTAN:Foreign Minister Makhdoom Shah Mahmood Hussain Qureshi said on Sunday that supreme court should take notice of irresponsible statement by Rana Sanaullah to seige court in case of any verdict given against Shahbaz Sharif. Talking to media here, the foreign minister termed the irresponsible statement by Rana Sanaullah as attack on independence of judiciary. It is meant to exert pressure on courts, opined Qureshi. The apex court should take suo moto in this regard, Qureshi said and added that PML-N wanted to seek verdicts after its own choice by putting pressure on courts. In past, PML N had also attacked the supreme court, recalled Qureshi. Responding to another question about the absence of opposition leader in Senate Syed Yusuf Raza Gilani from the house on occasion of passage of SBP (Amendment) Bill-2022, Qureshi stated that the government was thankful to Yusuf Raza Gilani. Qureshi added that Gilani could have reached Senate Session in five hours only. “We are confidential about the manner in which Gilani was elected as senator,” he maintained. About South Punjab province, Qureshi, once again, invited leadership of PML-N and PPP to make important amendments for South Punjab province in order to benefit 35 million people of the region. Qureshi stated that PTI government was also ready to share credit of South Punjab province with both the parties. There was no obstacle on part of PTI for creating South Punjab Province, said Qureshi. Creation of South Punjab province was part of PTI’s manifesto during elections 2018. Qureshi maintained that people gave mandate to PTI from across the region. However, he said, PTI lacked two third majority which was needed for the purpose. To a question about State Bank, the foreign minister stated that legislation was meant to provide autonomy to State Bank so that it should work independently, without influence of government’s policies. He, however, clarified that State Bank would be accountable to the Parliament. Similarly, the prime minister will appoint its Board of Governor. Qureshi recalled that PPP and PML N had also introduced some reforms in State Bank during their respective regimes. To another question, Qureshi stated the parties in Opposition lacked confidence in one another. PML N is levelling allegations on PPP. Similarly, JUI-F chief Moulana Fazlur Rehman has also questioned the absence of senators of other parties of Opposition in the recent session of the Senate. About recent incidents of terrorism, the foreign minister said Afghan government clearly stated that its soil would not be used for terrorism. He, however, observed that some spoilers wanted to create instability the region. About PM Imran Khan’s visit to China, Qureshi informed that a delegation led by Prime Minister Imran Khan would visit China to express solidarity with Chinese government for winter Olympics as some countries boycotted the mega event. Pakistan is strategic partner of China, said FM. During the visit, PM Imran Khan would met Chinese President Xi Jinping, he informed. The both sides wanted to promote trade ties further. Similarly, China has very clear viewpoint and always supported Pakistan on Kashmir issue. China also termed Indian Illegally Occupied Jammu and Kashmir, as a disputed territory. About local government elections, Qureshi maintained that PTI would actively take part in local government elections. The PTI government wanted to delegate powers at gross root level. Commenting on Sindh government’s local bodies legislation, Qureshi stated that all the political parties including PDM and Opposition were not satisfied with the amendments made by PPP’s Sindh government. About visa restrictions to Pakistani pilgrims by India, the foreign minister observed that Pakistani government introduced many steps including Kartarpur corridor. However, Indian government was not issuing visas to pilgrims for Ajmair Sharif. Even, Indian government also denied issuance of visas to Hindus Council members. Pakistan invited foreign ministers of Organization of Islamic Countries (OIC) on March 23, said foreign minister adding that the foreign ministers of OIC would also witness parade, professional capabilities of Pakistan army and different cultural activities on this occasion. About rising inflation, Qureshi termed it international phenomenon triggered due to coronavirus pandemic. He, however stated that masses were very much sensible and they understood who was responsible for inflation. Responding to a question about fertilizer shortage, Qureshi informed that the government was providing uninterrupted gas supply to fertilizer factories. Some dealers were involved in hoarding and black-marketing. The government was striving hard to discourage black-marketing. About Bilawal’s long march call, Qureshi observed that PTI under leadership of its Sindh President Ali Zaidi, would also hold long march from Ghotki to Karachi. Hopefully, things with Bilawal would settle in wake of long marches. Later on, the foreign minister addressed a gathering of PTI women wings hailing from 11 districts of South Punjab. He lauded efforts of women for cause of the party. He informed that government took some important steps to guard right of inheritance to women. Similarly, amendments were being made in criminal procedure code and it would surely facilitate masses. Hopefully, the amendments in criminal procedure code would have far-reaching impacts. Changes have also been in made in law pertaining to evidence recording, said Qureshi. He urged women wings to shun differences and work for cause of the party.