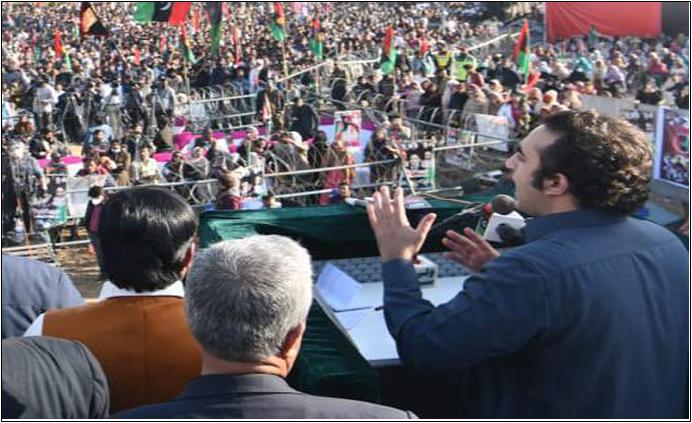 SARGODHA :Chairman of Pakistan Peoples Party (PPP) Bilawal Bhutto Zardari on Sunday said that he has declared war against Pakistan Tehreek-e-Insaf (PTI) led government. Addressing a public rally, Bilawal Bhutto said that on February 27, they will march from Karachi to Islamabad and will make sure their demands are met and selected rulers are sent packing. Bilawal further said that inflation is rising due to oppressive government, which is also attacking democratic, human and economic rights of the countrymen. The deal with International Monetary Fund (IMF) is also against people of Pakistan, he added. The chairman said that PTI government had promised to provide 10 million jobs and 5 million homes to the people but since coming to power, the incumbent government has snatched livelihoods of millions. Bilawal termed agriculture as backbone of the economy and said that during term of Benazir Bhutto, government was busy in service of farmers but this failed government has ruined the agriculture sector of the country. Agriculture is the backbone of our economy but since this failed government our agriculture has been ruined. Bilawal Bhutto said that despite the propaganda, the tyrannical government will not last long despite the propaganda of Imran Khan. We will sing for him to declare war on incompetent Prime Minister We will go out for this and when we get there we will put our demands before the government and the world. History will be written in history. .