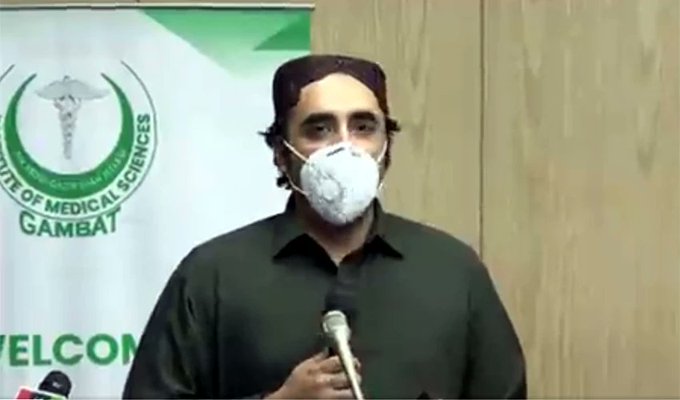 GAMBAT : Pakistan Peoples’ Party (PPP) chairman Bilawal Bhutto Zardari on Friday inaugurated the bone marrow transplant institute at Gambat Institute of Medical Sciences, and expressed his joy over the advancement of Sindh’s healthcare sector. He also reiterated his vision of providing free healthcare to all parts of Pakistan. At the inauguration event, the PPP chairman announced that the bone marrow transplant treatment at Gambat is now 100% free. He said that there is no hospital like the Gambat Institute of Medical Sciences where free treatment for liver, kidney, bone marrow and cancer is provided. He stated that the citizens are suffering from several diseases such as thalassemia, and the bone marrow transplant will leave a great impact on the lives of people seeking treatment. He also said 100 % free cancer treatment, and world class facilities are offered at Gambat. Bilawal further said that with the rise of car accidents, a rapid response emergency facility has also been launched. The aim is to open such centers in other cities as well so those suffering severe medical injuries from fires and accidents can be treated in the best possible way. “Gambat from today, is the medical capital of Pakistan,” said the PPP chairman. “I challenge all the provincial governments of the country to build a hospital like Gambat Institute of Medical Sciences, where free treatment for liver, kidney, bone marrow and cancer is provided,” he said. Bilawal revealed that Sindh has broken the national record by providing 550 free liver transplants. Amongst these, 52% people were from Sindh, 29% were from Punjab, 15% were from Balochistan, and 3% were from KPK. He said that Punjab has a liver and kidney institute that performs transplants, but the number of people from Punjab that Gambat treated is more than the overall patients their hospital admitted. “The vision of Shaheed Mohtarma Benazir Bhutto was to improve the healthcare system of the nation, and save the lives of elders. This is our vision of Pakistan,” the PPP chairman said. “We want healthcare to be completely free so no one can say they couldn’t get treated due to lack of finances. To reach our goal, we have made large number of investments, especially for tertiary care hospitals.” He said that when PPP had formed the government, the Waseela-e-Sehat Card was introduced to help the poverty ridden. When Mian Sahab came, he changed the name to PM Health Card, now PTI calls it the ‘Sehat Insaaf card’. “But you need a brain to even copy a bright idea,” said Chairman PPP. “The way they are running our card is wrong. We offered it to the poor – their card offers a subsidy of 5-6 lakh to private hospitals.