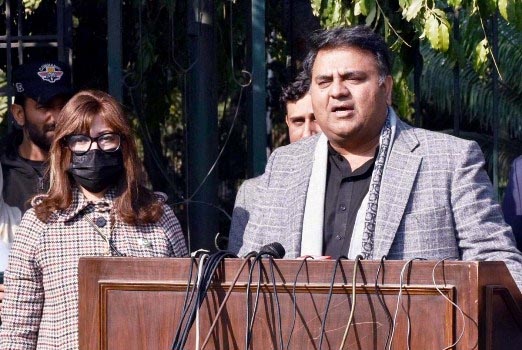 LAHORE:Federal Minister for Information and Broadcasting Fawad Chaudhry has said that fissures within the opposition parties and their blunted political strategy have resulted in another demoralizing defeat for the opposition as it failed to block passage of the State Bank of Pakistan (SBP) Amendment Bill in the Senate. Briefing the media on Prime Minister Imran Khan’s day-long visit here on Friday, he said on paper, the opposition claimed a majority in the upper house yet it was incapable of stalling the SBP bill, adding that the opposition was a ‘tried and tested loser’ lacking policy. “Opposition’s dream to table a no-confidence move against PM Imran Khan has dashed to the ground today with their defeat in the Senate where the opposition enjoys so-called majority”, he said, suggesting the opposition to rest, nurse its wounds for a few days and desist from creating a storm in a tea-cup in political scene. Congratulated the nation on the passage of the SBP bill, the information minister said the bill had ensured that the SBP would be an autonomous entity in the country as it had been freed of political interference by the Pakistan Tehreek e Insaaf (PTI) government. He said the SBP board would be a powerful board which will play its positive role in bolstering the country’s economy. Fawad said the PTI had proved its majority in the Senate with the passage of the bill, adding that all opposition parties could not face Imran Khan alone. “The opposition is a union of varied ideologies with the PML-N is marred by infighting for leadership within the party, the PPP is rudderless while Maulana Fazalur Rehman is a worthless player (a wandering calf) referring he had no worth in pulling the cart.
,” Fawad said. On the prime minister’s visit to the Central Business District (CBD) and the Ravi Urban Development Authority (RUDA), he said the CBD sprawls across Walton Road to the Walton Airport area and it had attracted an investment of over 24billion rupees so far, adding that it is the first planned commercial project of downtown Lahore comprising high-rise buildings which change the landscape of the historic Lahore. Regarding the RUDA, he said although the honorable Lahore High Court (LHC) had expressed its reservations on the Ravi Urban Development Authority (RUDA), but we must not forget that it is prerogative of the executive to settle new cities as policy-making is the domain of parliament and not the courts. He said the institutions should work within their constitutional ambits, adding the policy making was the prerogative of the government and the other institutions should not interfere with others’ domain. He said the interference of the courts in Riko Diq and Steel Mill cases did not augur well for the country in the past. The information minister said the government had filed an appeal in the apex court against the LHC verdict on RUDA, adding that the government is sure to get relief from the supreme court by presenting the case in a better way. “A line should be drawn between acquisitions of land for a housing society and settling a new city and the government is laying foundation of a new city between Lahore and Sheikhupura under the RUDA”, the minister said. He said the Ravi city would generate billions of dollars of investment from home and abroad, adding that the project should complete in time and provide new business opportunities in the central Punjab. To a question regarding Shahzad Akbar, he said the dream of a new Pakistan was not about individuals but it was about dreams that people had envisaged and chosen PM Imran Khan to fulfill those, adding that it was for the first time that reforms had been introduced by the government. He said it was a great achievement no scandal had surfaced against the prime minister and the cabinet. To a question, he thanked opposition leader in the Senate Syed Yusuf Raza Gillani and PPP for indirectly supporting the SBP Amendment bill in the upper House by not attending the session today. He said the Pakistan Muslim League- Quaid (PML-Q) was an integral part of the government and the differences, if any, had always been resolved amicably, adding that there was no difference of opinion between the two parties. On Nawaz Sharif, the information minister said the PML-N supremo Nawaz Sharif was not coming back of his own accord but he will be forced to return, adding that he was thankful to the British government for rejecting both appeals of Nawaz Sharif to stay in the UK.