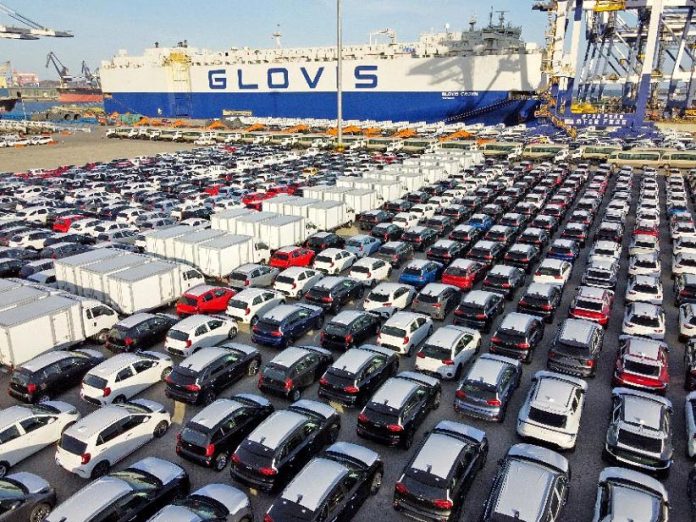 Early in the morning of Jan. 1, 2022, a China-Europe freight train loaded with 100 twenty-foot equivalent units (TEUs) of containers set off from an international freight logistics base in Guangzhou city, capital of south China’s Guangdong province.

The train left China via the land port of Manzhouli on the China-Russia border for Vorsino Station in Moscow, Russia. It will arrive at its destination, which is more than 10,000 kilometers away, 16 days after its departure.

The China-Europe freight trains have so far made a cumulative total of over 40,000 trips, carrying various kinds of goods to 174 cities in 23 European countries through 73 freight routes. With a logistics distribution network covering the entire Eurasian continent, these freight trains have effectively guaranteed the stability of international trade.

Since the launch of reform and opening up in 1978, China has continuously promoted institutional reform and innovation in foreign trade. As a result, the country’s goods trade enjoyed leapfrog development, with its structure continuously improving and overseas market constantly expanding, making important contributions to the country’s social and economic development.

Riding on the wave of the Canton Fair, Galanz, a leading home appliance maker in China, has gained an increasing share in overseas market over the past more than 20 years. Its products are now in great demand in more than 200 countries and regions.

At first, the company’s exhibits at the Canton Fair were only several microwave ovens and rice cookers, and it needed to scramble for foreign orders on site. Today, people can see smart home appliances for the whole house exhibited by Glanz, and the company is attracting more and more foreign customers through various channels both online and offline.

In 2020, when the external environment for foreign trade was complex and grim, China’s trade in goods scored a total value of 32.16 trillion yuan, making the country the only major economy in the world to realize positive growth in foreign trade in goods, which has further consolidated the country’s position as the world’s largest trader in goods.

In the first 11 months of 2021, China’s foreign trade in goods totaled 35.39 trillion yuan, up 22 percent year on year. During the same period, the country’s imports and exports with main trading partners such as the ASEAN, the EU and the U.S. all enjoyed double-digit growth.

The joint construction of the Belt and Road Initiative (BRI), while creating new space for global economic growth, has opened up new horizons for the development of China’s foreign trade. Driven by the initiative, various regions have vigorously optimized their foreign trade structures, effectively promoting the orderly and free flow of both international and domestic factors of production, efficient allocation of resources, and in-depth integration of markets.

During the first three quarters of 2021, China’s foreign trade with countries along the routes of the BRI surged 23.4 percent from the same period of the previous year.

China’s exports of high-tech and high value-added products have witnessed particularly rapid expansion. The export volume of China’s mechanical and electrical products jumped 21.2 percent in the first 11 months of 2021, with its proportion in China’s total foreign trade rising to 59 percent.

At the final assembly workshop of eGT New Energy Automotive Co., Ltd., a new-energy vehicle (NEV) manufacturer headquartered in Shiyan city of central China’s Hubei province, 240 NEVs roll off the production line every day, 80 percent of which are sold to overseas customers. In 2021, the company exported more than 10,000 NEVs to overseas markets.

Under the “1210” mode, e-commerce platforms can temporarily store goods at comprehensive bonded zones in advance, and sort and package them at their own warehouses in the zone, said Shi Zhibin, overseas operations director of the company.

The mode features advantages including low cost, fast tax refund and high efficiency, according to Shi, who disclosed that the company set up its overseas warehouse for cross-border e-commerce at the Yangshan Special Comprehensive Bonded Zone because of its special geographical location and favorable policies.

The country’s Ministry of Commerce has worked together with various localities and departments across the country to continuously improve relevant policy systems and optimize business environment. As a result, a growth of nearly 10 times in the trade volume of cross-border e-commerce was realized in five years, export volume through market procurement trade methods rose five times in six years, and the country’s number of overseas warehouses exceeded 2,000, according to Ren.