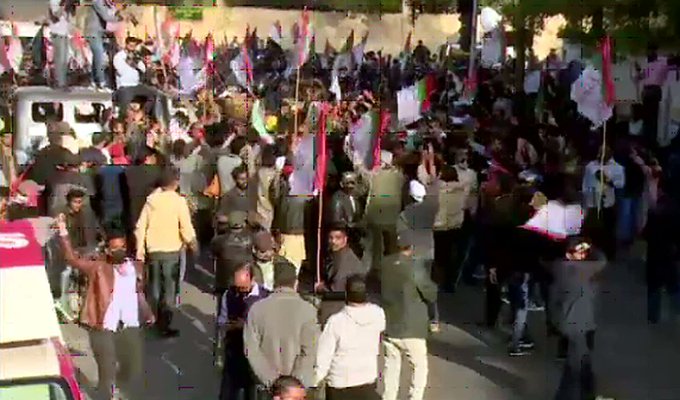 KARACHI:Several members of the MQM-P, including women, were left injured after Karachi police baton-charged and tear-gassed them during a protest at the city’s Shahrah-e-Faisal,  MQM-P workers and leaders gathered in large numbers during the afternoon hours to stage a protest against the controversial local government bill. Later on, the protesters attempted to reach the Chief Minister’s House for a sit-in. As a result, the flow of traffic was severely affected on the road considered to be the city’s main artery. The police, however, baton-charged the crowd and used teargas shells in an attempt to dissuade it from entering the red zone. MQM-P representatives said several women and children participating in the protests sustained injuries, while the police arrested several MQM-P leaders and activists. Member of the Provincial Assembly (MPA) Sadaqat Hussain was also injured because of the baton charge. Contingents of south police were deployed at the site of the protest to disperse the demonstrators. According to the traffic police, the Shahrah-e-Faisal road started to become choked as protesters continued to advance forwards, therefore, they said they had “no choice but to use force and fire teargas shells. The protesters, however, insisted that they were “staging their protest peacefully, but the police went ahead and used force to disperse them,” the report said. The police have cleared the area and roads have traffic has been resumed, while five people have been arrested so far from the area near CM House, the report added. MQM-P leaders and workers later left for the press club where the top leadership held a press conference in order to decide on an action plan. Speaking to the media and workers outside the press club, MQM-P’s parliamentarian leader Khalid Maqbool announced that the party will observe a “Black Day” tomorrow (January 27). “The way the police treated our women party workers is a question of our honour,” he said while asking “who is responsible for the injuries sustained by MPA Sadaqat Hussain?” He warned the provincial government that if MQM-P does not get updates on party workers who have been taken into custody then the party will be “free to take any decision.” Urging Prime Minister Imran Khan to visit Karachi as soon as possible, Maqbool said that the premier needs to choose between the people who want to break Pakistan or those who are “working for the survival of the country.” MQM-P leader further demanded an inquiry against Chief Minister Sindh Murad Ali Shah, saying that he should resign or else the party will take strict actions against the provincial government.