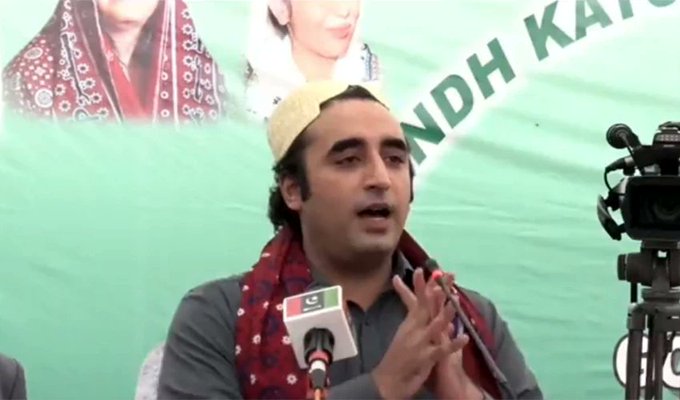 LARKANA Chairman Pakistan Peoples Party (PPP) Bilawal Bhutto Zardari on Tuesday said that his party will send government packing with the help of people. While addressing a ceremony regarding granting land rights to residents of slums, Bilawal Bhutto asked that if Bana Gala can be legalized than why house of a poor man cannot be regularized. He further said that they are facing problems in regularization of Orangi Town as well as Gujjar Nullah. However, Bilawal assured that no stone will be remain unturned in efforts to grant rights to the poor. While criticizing Supreme court decision regarding Nasla Tower, PPP Chairman said demolition of the building was injustice with the residents. We would be sorry if the leader of the people gave us this constitution and this country belongs to the people of this country. When this tyrannical government in particular has plunged this country into economic crisis and eroded the roof over the poor, we would have been very surprised if he had regularized his Bani Gala house when he became the Prime Minister. The Prime Minister is regularizing his house for a small amount of money then there will be same policy for the whole country but you see how One after another it seemed that all the powers of the country were working for the removal of the wall from the head of the people. Today I am proud of the people of Larkana. We have the land and no one can take it from us. The political consciousness of the people here that the people here have struggled to form an organization. Today is the day of success of your movement. I salute the people of Larkana. He said that we are very saddened that there are difficulties in regularizing Gujjar names and races but there are no problems in regularizing Bani Gala. We will also give them ownership rights and protect their floodplains and this is a series that has started. We hope that the Provincial Minister for Floods and Government of Sindh will speed it up and it will be done in February. Give our rights to the poor who have been living here for generations.
PPP never objected when a judge, bureaucrat is given a plot now no one will object that we are giving our rights to the poor, do you want to see a Pakistan where ordinary people, white coats and working people If you want to see BB Shaheed’s Pakistan and this Pakistan then strengthen your hand by supporting PPP and me as we have solved this problem of the people and wherever the common people are worried and their problems We want to solve them. If the people support us then we will create a Pakistan in which everyone has his rights. He said that in order to bridge the gap between rich and poor, the poor must be given their rights. The most important part of this is ownership of land. The economic condition of the children will improve. He said it would be a disappointment if the government’s work did not close the gap between rich and poor. He said that the promise made by Shaheed Mohtarma Benazir Bhutto to the people and we gave the property rights to the people of Katchi population.