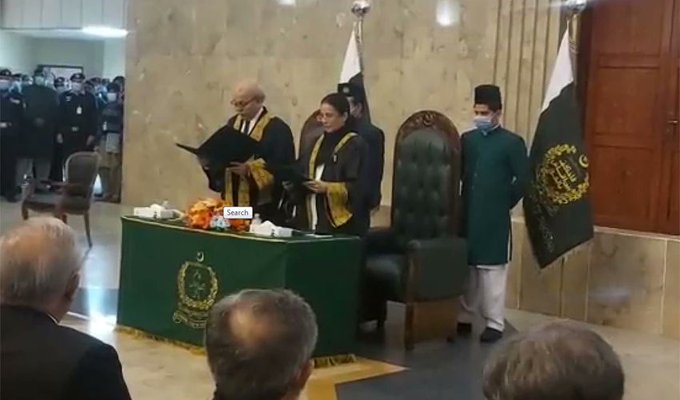 ISLAMABAD: Justice Ayesha Malik has made history in Pakistan’s judicial system after being sworn in as the first female judge of the Supreme Court of Pakistan, at an oath taking ceremony inside the Supreme Court building on Monday. The oath was administered to Justice Ayesha by Chief Justice of Pakistan Gulzar Ahmed, while Justice Umar Ata Bandial, who has been nominated as the next top judge of Pakistan, and other SC judges, also attended the ceremony. On the occassion, CJP Ahmed said that no one can take the credit for Justice Ayesha’s appointment as an SC judge. “Justice Ayesha has been appointed on the basis of her merit,” the CJP said. Meanwhile, Justice Ayesha’s appointment as the first woman to serve as an apex court judge garnered massive applause from federal ministers and others on Twitter. Federal Minister for Information and Broadcasting Fawad Chaudhry shared a picture of Justice Ayesha taking the oath to congratulate her. The minister expressed hope that the newly appointed judge will prove to be “an asset to our judicial hierarchy”.