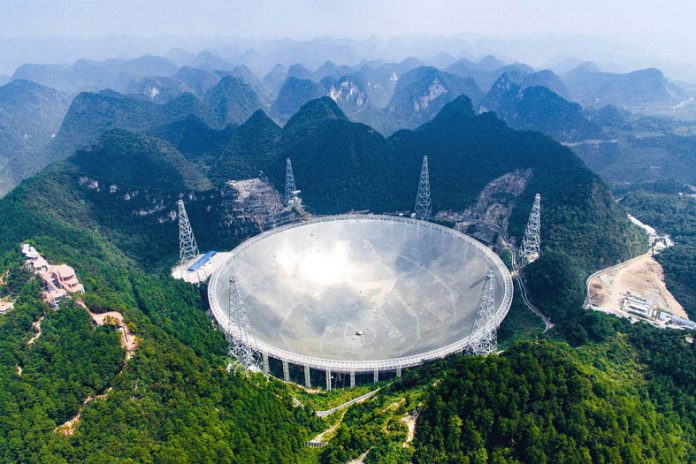 The FAST has witnessed continuous improvement in its operational efficiency and quality over the past nearly two years since it was officially put into operation. The annual observation time of the facility has exceeded 5,300 hours, far more efficient than international peers expected. Such efficiency is crucial to its scientific outputs.

Neutral hydrogen, the most abundant element in the universe and an element that has existed in abundance in different ages of the universe, is one of the best tracers for the distribution of scale-variant matter.

With self-developed HI Narrow Self-Absorption (HINSA) technique, an international cooperation team led by Tao-Chung Ching and Li Di, scientists with the National Astronomical Observatories under the CAS (NAOC), obtained for the first time high-confidence detection result of the Zeeman effect in protostellar core envelope using the FAST, which serves as important observational evidence for answering the question of magnetic flux, one of the three classic questions about the formation of fixed stars.

Fast radio bursts (FRB), which were first discovered in 2007, are the brightest radio bursts in the universe. The seemingly extragalactic radio pulses last only a few milliseconds. So far, scientists have detected several hundred events of FRBs, and only a few of them indicated bursts from a single repeating FRB source.

FRB121102 is the first repeating FRB source known to man. In 2017, it became the first FRB that was accurately located and whose host galaxy was identified.

Using the FAST, an international cooperation team led by NAOC researchers Li Di, Wang Pei, and Zhu Weiwei, carried out observation of FRB121102. The team detected 1,652 independent bursts from the source in about 50 days and obtained the largest sample of FRB events to date, with its number of FRB events surpassing the total number of FRB events in all the published papers of the field.

Pulsars can emit highly periodic pulses, with the pulse periods ranging from 1.4 milliseconds to 23 seconds. Short-period pulsars, which are also called millisecond pulsars, are comparable in accuracy to the best atomic clocks on earth. Therefore, finding pulsars is one of the main targets of scientific observations by large-scale radio telescopes in the world.

The FAST has by far helped scientists identify about 500 new pulsars, becoming the world’s most efficient facility in discovering pulsars since the beginning of its operation.

Equipped with 19-beam receiver at L band, the FAST is so far the world’s most powerful facility for searching for pulsars.

Within less than two years, Galactic Plane Pulsar Snapshot survey (GPPS), a major priority project of the FAST led by Han Jinlin with the NAOC, conducted about 620 hours of scientific observations and completed 8 percent of the planned search area.

Up to now, the project alone has found 279 new pulsars, including 65 millisecond pulsars and 22 pulsars in binary systems. The project found more pulsars within one and half years since its launch than the Arecibo telescope in the U.S. did in 15 years.

Believing that international cooperation and openness and sharing of relevant resources are essential to scientific and technological innovation, China established the principle of gradually opening the facility in accordance with international practice at the beginning of the construction of the FAST. On March 31, 2021, the FAST officially opened to the world and started to collect observation applications from astronomers around the world.

The FAST received 7,216 hours of observation applications submitted by scientists from various countries during this round of application collection and finally granted approval to 27 international projects from 14 foreign countries, according to Jiang Peng, executive deputy director of the FAST operation and development center and chief engineer with FAST. These projects started to use the FAST for scientific observations in August 2021, Jiang said.