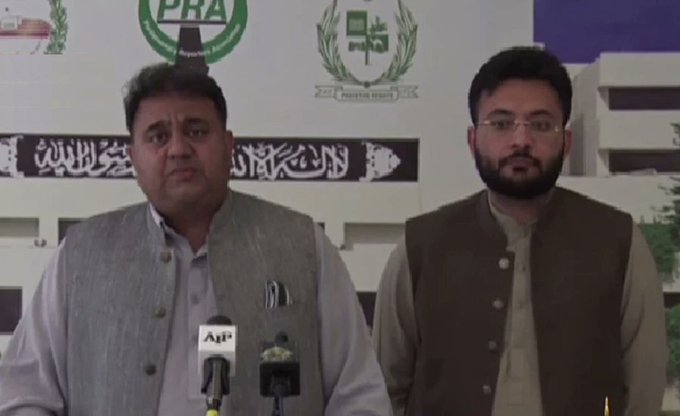 ISLAMABAD: Federal Minister for Information and Broadcasting Fawad Chaudhry on Wednesday held a press conference in Islamabad to provide details of the money-laundering case against Leader of the Opposition in the National Assembly Shahbaz Sharif. Responding to Shahbaz’s press conference earlier in the day, Chaudhry said that “he lied for more than one hour during the briefing”.”Shahbaz held a long press conference today but nobody was able to understand what he was trying to say,” Fawad said. “He continued to lie throughout the one hour and 10 minutes of the press conference instead of providing answers to the allegations cases against him.” Shahbaz had held a press briefing after a UK court ordered his and his family’s bank accounts restored. The PML-N president had said that the National Accountability Bureau (NAB) and Federal Investigation Agency (FIA) could not prove corruption of “even a single penny” against him and former prime minister Nawaz Sharif. The information minister said that the “Sharif family has become habitual to distorting the truth.”  He continued: “Unfortunately, fake news was disseminated two days ago and all those involved in publishing the news are well-known to the public for having ties with the Sharif family”.”The headlines that were carried [by a media outlet] were part of a fake propaganda,” Chaudhry maintained, adding that the money-laundering probe initiated against the Sharif family in London was “not started upon the request of the Pakistani government.” He said that the two-year-long probe by the United Kingdom’s National Crime Agency (NCA) was launched into the accounts of a frontman named Zulfiqar Ahmed. “The NCA had started probing the accounts of Zulfiqar Ahmed and Suleman Shahbaz. It was the agency’s own decision [and had nothing to do with the Pakistani government].”  The NCA also approached Pakistan’s Asset Recovery Unit (ARU) to seek the details of financial transactions and hundis. “The case was neither initiated by the Pakistani government nor mentioned anything about Shahbaz Sharif,” he said.  He said that there are two ongoing “ripe” cases against Shahbaz Sharif in Pakistani courts. One of the cases was registered by NAB Lahore against Shahbaz Sharif and his family members in reference to Rs7.32 billion. Chaudhry said that for the last six months, the court did not have a judge, which allowed Shahbaz to hold press conferences and deliver speeches in the assembly. “It is because the proceedings of these cases are not being held on a day to day basis,” he said.Providing further details, Chaudhry said that there is another Rs25 billion case against Shahbaz registered by the FIA as a result of the probe carried out by the Sugar Inquiry Commission. The minister said that when the PTI government and Prime Minister Imran Khan talk about accountability and looted wealth, they are only concerned because “this money belongs to the people of Pakistan”.”When we talk about accountability, we talk about handing over the looted money back to the people of Pakistan,” said Chaudhry.