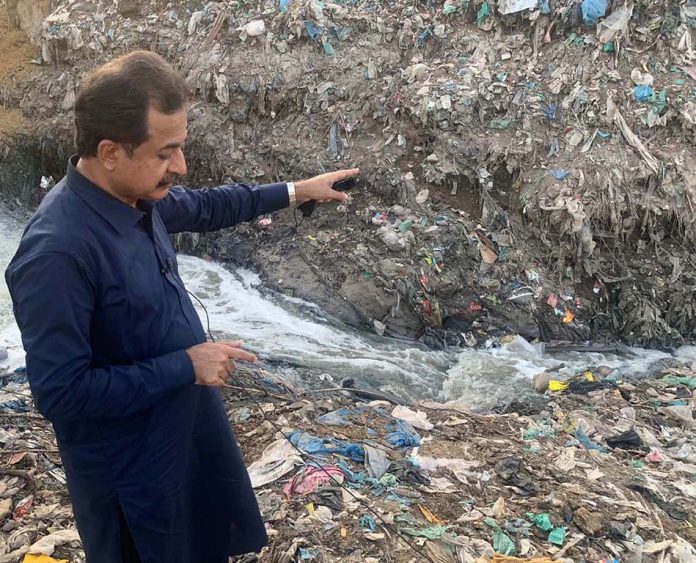 KARACHI/HYDERABAD: The Central Vice President PTI and Leader of the Opposition in Sindh Assembly, Haleem Adil Sheikh, Monday, rebuked Sindh government for not implementing report of Supreme Court mandated water commission. Over 85 percent population of Sindh were compelled to consume sewerage mixed contaminated water as neither provincial government controlled drainage of sewerage water into irrigation channels nor treatment plants were installed as per directives of the water commission, Haleem Adil Sheikh said during visit of Phulleli and Pinyari canals in Hyderabad. Haleem Adil expressed annoyance over disposal of highly contaminated sewerage water without any treatment into Phulleli and Pinyari canals and said that over 5 lac people in Sindh were affected by Hepatitis while Cancer, Ulcer, Typhoid and other water borne disease were common in the province due to air and water pollution. A water commission was constituted on directives of the Supreme Court that compiled a detailed report over the situation of water contamination in Sindh, he said adding that the report was sent to the provincial government but PPP government failed to implement recommendations of the commission. Sewerage water including the hazardous industrial and hospital waste was being disposed off in River Indus and its irrigation canal which were major source of drinking water for the most of the population in the province, he observed. Murtaza Wahab remained provincial environment minister for more than six years and it his responsibility to ensure implementation on report of the water commission but not a single effluent treatment plant could be made operational, he stated. ewerage water of Sukkur was being disposed off in river Indus, sewerage drains in Shikarpur fall in Baghari canal, Larkana’s drains were falling into Rice canal and sewerage water in Dadu was being disposed in MNV drain, Haleem Adil Sheikh mentioned. He said that sewerage water of Hyderabad and Jamshoro found its disposal in Phulleli, Pinyari and Akram canals while industrial areas of Kotri and Nuriabad were draining out industrial waste and sewerage water into KB Feeder that feed Keenjhar Lake the major water source of Karachi. Manchhar Lake, once the largest sweet water lake of Pakistan, has been spoiled and now PPP government was up to Keenjhar Lake, Haleem said adding that statistics revealed that in Karachi 95 % piped water was contaminated while the ratio in Hyderabad was 85 %, in Larkana 88 % and in Shikarpur 78 %.It was fundamental responsibility of the government to provide basic facilities to masses and do away with their problems but Sindh government was busy in corruption and kept neglecting the people, he alleged and went on saying that PPP government had devastated the entire province of Sindh.