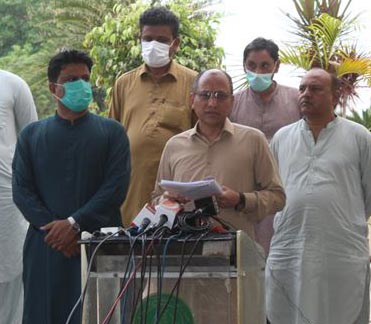 KARACHI:Sindh Minister for Information and Labor Saeed Ghani has said that the KCR project which was laid the foundation stone by the Prime Minister today is actually a 2004 project and a complete study on it was completed by Japanese company JICA in 2006. For some reason, the project was delayed till 2016. Later, Sindh Chief Minister Syed Murad Ali Shah wrote a letter to the then Prime Minister again on July 29, 2016 to subsequently bring the project in C-Pack. Also, the Chief Minister of Sindh had raised not only the federation but also in the meetings to be held in China. The present incompetent, incompetent and selected government has not fulfilled any of the promises made during the last three years. Be it GDA or PTI, the lines of many of its members are lined up outside the door of PPP. Action has been taken against the officers who were negligent in the responsibility of the organization in the Mehran Town tragedy Several have been suspended and several have been issued show cause notices. Replying to a question, he said that although this foundation stone has been laid in a hurry and it was said that if Sindh province helps them in this, then Sindh province will definitely help them in this. To a question, he said that whether it is K4 project or joint project of other federations and provinces or projects announced by the federation for Karachi, promises have been made but at least I do not see it being fulfilled. To another question, Saeed Ghani said that whether it is PTI or GDA, whether they meet in the Governor House or the Prime Minister’s House, it does not matter to us.