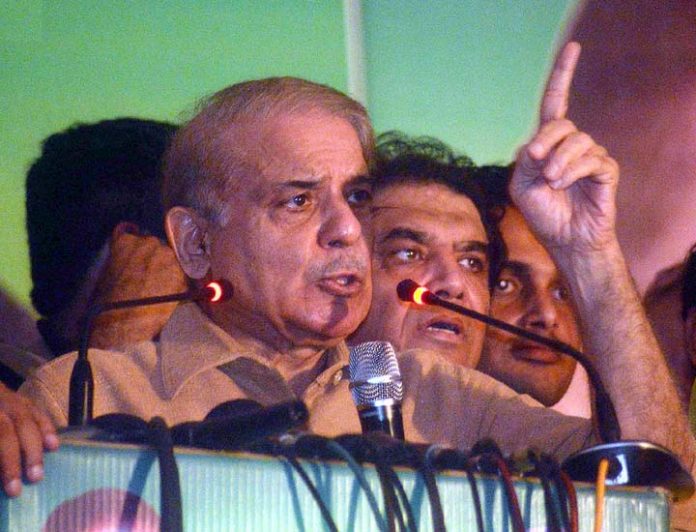 PML-N President Shahbaz Sharif on Sunday boldly claimed that his party will “bury PTI forever” in the 2023 general elections. Addressing a PML-N workers convention in Rawalpindi, the Opposition leader, congratulated the party for achieving significant success in the recently held cantonment board elections. In the polls held on September 12, PTI managed to secure 63 seats while the PML-N won 59 seats from across the country.  “Our success in the cantonment board elections is not ordinary,” he said, noting that the party had performed even better in Rawalpindi than Lahore, a city considered their stronghold. “We wiped out the PTI,” he declared. Speaking of the 2023 elections, he demanded that they be held transparently, adding that he holds these expectations from Election Commission of Pakistan, the judiciary and all institutions. Shahbaz said that three years ago, when the PTI came into power, “having this selected prime minister selected destroyed Pakistan”. He said now, after 3.25 years, the people’s “eyes have opened” to the truth. The Opposition leader said that Pakistan “has no respect” and has been left “penniless”.”They have ruined the economy with the loans they have taken,” he added. “And this selected prime minister then says ‘you must not panic’.” Shahbaz urged the people to “take a stand” against soaring inflation. “They said they would provide millions of jobs, and have instead deprived hundreds of thousands of employment,” he said. He said that the poor man today is left to his devices, with “no (affordable) medicine” and with the prices of flour, pulses and sugar rocketing sky high. “Our 2018 manifesto promised homes for people […] had it been our government in power today, we would already have provided hundreds of thousands of people homes,” Shahbaz claimed. “Had it been our tenure, hundreds of thousands would have been granted jobs,” he added. Shahbaz also criticised the rupee’s depreciation, saying that the dollar seems to have “sprouted wings”.”We must drown out this government with the tidal wave of the people,” he urged.