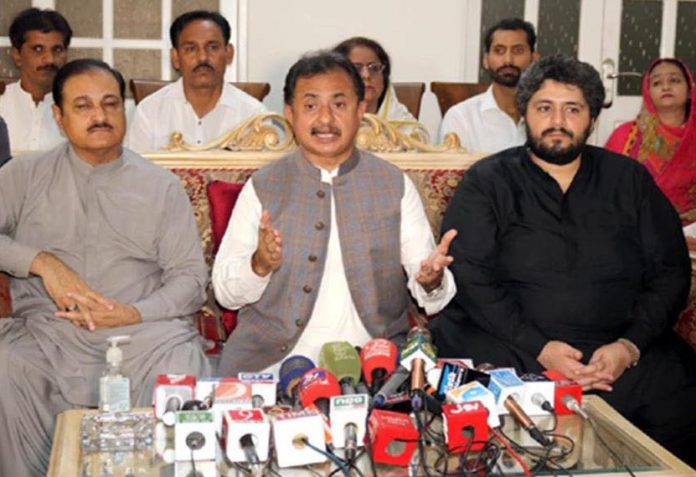 KARACHI: The Central Vice President PTI and Leader of the Opposition in Sindh Assembly, Haleem Adil Sheikh, alleged Sindh government of destroying education system in the province during their 13 year tenure. He, while addressing a media conference here at Sadat House Rohri on Saturday, said that political interference in educational institutions of Sindh was playing havoc and youth of province was being denied of their fundamental right to quality education. Referring to IBA Sukkur, Haleem Adil Sheikh said that it was an institute of good repute that was providing quality education to students belonging to upper Sindh but PPP government had inducted black sheep into IBA. Haleem Adil Sheikh also raised concerns over handing over of management control of Public School Hyderabad to IBA Sukkur and said the decision would negatively affect the public school. Haleem said that NICVD Sukkur was an important public sector health facility in northern Sindh and Rs 2.5 billion were allocated for it in annual budget but its performance could be gauged by the fact that it could not diagnose ailment of Khursheed Shah, a central leader of PPP. He said that after his press conference in Sukkur the other day, district police instead of holding inquiry into allegations conduct ed raids at residence of PTI leaders. Police was trying to falsely indulging PTI leadership in fabricated cases, he alleged. “Do not coerce and victimize political opponents and bring the real culprits of murder to justice,” Haleem Sheikh asked the Sukkur Police adding that SSP Sukkur Irfan Samo who was posted in Sukkur for three years had crossed all the limits. Earlier speaking to media persons at Ubauro Press Club here on Saturday, Haleem Adil Sheikh said that basic facilities were missing in schools and quality of education was continuously on decline. A school desk worth Rs.3500 was being procured in Rs 29000, Haleem added. PTI leaders Mir Iftakhar Lund, Sardar Pappu Khan Chachar, Amanullah Chachar, Ajmal Solangi, Naeem Adil Sheikh and others were also accompanied with Haleem Adil Sheikh. Haleem Adil Sheikh stated that the Prime Minister Imran Khan led PTI government’s commitment and efforts for strengthening national economy were bearing positive results that was evident from economic indicators of Pakistan that grew despite international melt down due to COVID-19. Haleem Adil vowed that PTI would ameliorate the situation in Sindh as well. He said that Ghotki was the second most revenue generating district of Sindh after Karachi that received billions of rupees as royalty in previous years but all the cities and towns of the district were in dilapidated condition. The opposition leader observed that a committee was also constituted for utilization of amount of royalty but outcome of expenditure of billions of rupees was not seen anywhere and Ghotki was portraying scenes of ruins. He added that it seemed that all the funds were spent on residences of PPP MNAas and MPAs. Haleem Adil Sheikh said that federal government has completed CPEC roads including Sukkur Multan section of Motorway but Sindh government could not provide a link road for connecting Ghotki with them and resultantly people of the area were unable to reap the benefits of federally funded projects. Haleem Adil Sheikh further said that local administration has failed in facilitating the masses even funds of union councils earmarked for installation of 90 solar schemes were spent on houses of local influentials while jobs were also distributed among ‘Waderas’ of the areas. “ PTI will keep raising voice for neglected citizens of Ghotki district and was all set to contest and win upcoming local bodies’ and general elections from the district,” Haleem said adding that his party enjoyed overwhelming support of the masses and the were hopeful to sweep the district. Earlier, Haleem Adil Sheikh appeared before Anti-terrorism Court at Mirpur Mathelo for hearing of NA-205 bye elections case registered on July 23, 2019. Counsel for Haleem Adil Sheikh concluded his arguments while witnesses’ statements were also completed. The court adjourned the hearing to October 25. Speaking outside the court Haleem Adil Sheikh termed the case as false and fabricated and said that he was appearing in the court from past three years. Sindh government has booked him under charges of obstruction in performance of official duties, he said and questioned if police was working in Sindh whose duties could be obstructed.