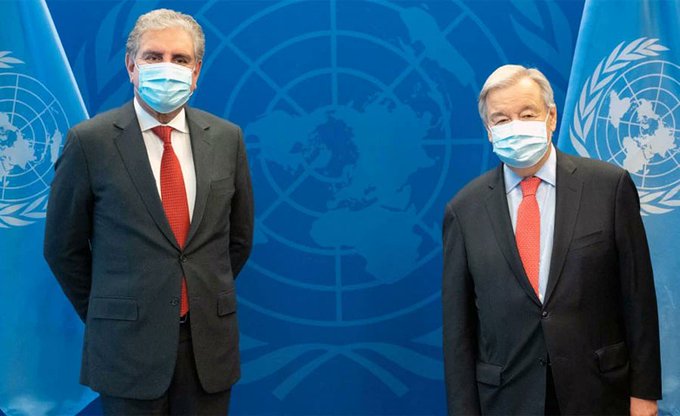 UNITED NATIONS: Pakistan Foreign Minister Makhdoom Shah Mehmood Qureshi held wide-ranging talks with UN Secretary-General Antonio Guterres Friday that focused on the decades-old Kashmir dispute and the evolving situation in Afghanistan. A, according to an official press release. The meeting took place at the UN headquarters in New York, an official press release issued by the Pakistan Mission to the UN said. Apprising the UN chief of the dire situation in Illegally Indian Occupied Jammu and Kashmir (IIOJK), the foreign minister said the unilateral Indian measures taken in the disputed territory are a threat to regional and international peace and security, it said. FM Qureshi presented a comprehensive dossier to the Secretary-General detailing serious, systematic and widespread human rights violations, war crimes, crimes against humanity and genocide perpetrated by the Indian occupying forces. India, he said, was busy changing the demographics of Kashmir, ignoring UN Security Council resolutions and international law. The Foreign Minister urged the UN Secretary-General to resolve the Kashmir issue in accordance with the UN Charter and Security Council resolutions, the withdrawal of illegal and unilateral measures of August 5, 2019, and the right of Kashmiris to their legitimate rights. He also called for pressurizing India to achieve self-determination for the Kashmiri people. On Afghanistan, FM Qureshi called for the international community to take immediate steps to provide immediate humanitarian and financial assistance to Afghanistan and promote peace and stability. The Foreign Minister briefed the UN chief on Pakistan’s assistance in the safe evacuation and relocation of UN and international staff from Kabul. He also apprised the Secretary-General of the establishment of the “Human Corridor” for the delivery of aid and relief goods sent by Pakistan to Afghanistan by air and land. During the meeting,the Foreign Minister stressed the need to take effective measures to curb the growing intolerance., discriminatory attitudes and Islamophobia. He also called for the elimination of the corona vaccine inequality and for ensuring adequate financial support for developing countries to deal with epidemics and their economic implications.