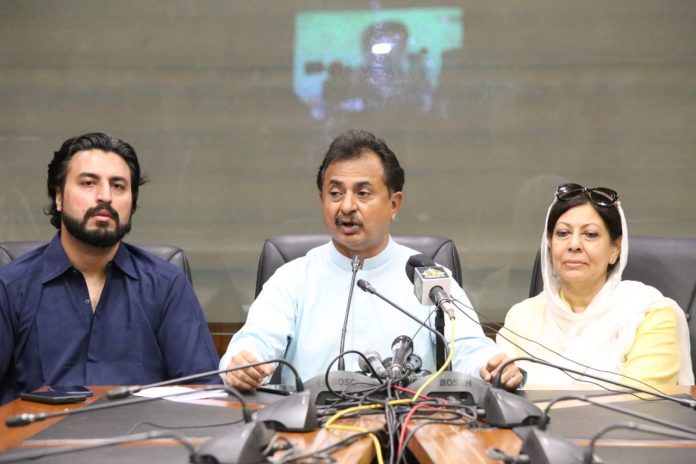 KARACHI: The Central Vice President PTI and Leader of the Opposition in Sindh Assembly, Haleem Adil Sheikh, Wednesday, alleged Sindh government of victimizing political opponents and killing PTI supporters in fake encounters. Haleem Adil Sheikh, while addressing a press conference here at Sindh Assembly Building along with PTI leaders Maleeha Soomro and Moula Bux Soomro, appealed Chief Justice of Pakistan to take notice of extrajudicial killings and involvement of police in political victimization in Jacobabad. Haleem Adil Shiekh said that PPP government was using police force against political opponents while advisor to CM Sindh Aijaz Jakhrani has started killing political opponents in connivance with Jacobabad police. Jacobabad district is located at Sindh Balochistan border and become hub of illegal activities including robberies, smuggling and drug peddling, Haleem alleged and went on saying that SSP Jacobabad had become a contract killer and police was targeting PTI workers, supporters and voters in the district on directives of PPP leadership. “Robber gangs of riverside area send death threats to Muhammad Mian Soomro- a federal minister- but district police chief do not take any action”, Haleem Adil bemoaned and added that Jacobabad police was busy in targeting political opponents. Haleem Adil Sheikh said that Chief Justice Supreme Court of Pakistan Justice Gulzar Ahmed, during hearing of Nasla Tower review petition passed humiliating remarks about Sindh government. Game of corruption and robber gangs was on in Sindh and even such demeaning remarks by the CJP could not embarrass the provincial government, he opined. Replying to a question on Apex court’s decision on Nasla Tower review petition Haleem Adil Shiekh said that he would not comment on Supreme Court’s decision but it was essential to compensate the individuals who booked apartments in the contentious project. It must be ascertained that who issued NOC’s for construction of Nasla Tower and who were responsible of the situation? Haleem Adil stressed saying that responsible officers must be made accountable of their corruption and recovery should be made from builders, co-operative society, and responsible officers of KDA, SBCA and other relevant government departments. On another query on Sindh police, the opposition leader said that policing was a provincial subject and federal government could not directly intervene into the matter. The incumbent IG Police Sindh disgraced the police force and civil law enforcing agency was patronizing drug peddling and robber gangs in the province, he alleged. Haleem Adil Sheikh said that Chief Secretary and IG police were not removed without consulting the provincial government. Removal of IG or chief secretary could not make any difference and it was necessary to remove the real culprits the PPP Sindh cabinet, he asserted. Earlier, Maleeha Soomro- PTI leader and sister of federal minister Muhammad Mian Soomro- said that Rs 44 billion- earmarked for development of Jacobabad including Rs.30 billion of Sindh Education Sector Reform Program- were embezzled that was also pointed out by the deputy commissioner in his report. Supreme Court of Pakistan, taking notice of the issue, directed NAB to conduct inquiry and submit a report within three months but Aijaz Jakhrani kept seeking bails to avoid the inquiry for three years, she said adding that when a NAB team reached at residence of Jakhrani it was ambushed while district police was reluctant to register FIR of the incident. It was clear evidence of connivance of police officers with the culprits, she asserted. Central president PTI Youth wing Moula Bux Soomro, speaking at the occasion, blamed SSP Jacobabad Shumail Riaz Malik of serving political motives and said that on May 22 two PTI supporters were killed in a fake encounter in front of 15 police centre while the third person who got injured was abducted and there was no information of his whereabouts so far. He said that neither inquiry of the incident was carried out nor any action was taken against officials involved. Even one of the officers involved in the incident were nominated head of the investigation team, he pointed out. He said that 8 other innocent people were injured in fake encounters while on the other hand robber gangs were at large and smuggling of Iranian Diesel and narcotics was being done freely via Balochistan border, Soomro said and appealed Chief Justice of Pakistan to take notice of the situation to ensure immediate measures to check the lawlessness in district Jacobabad.