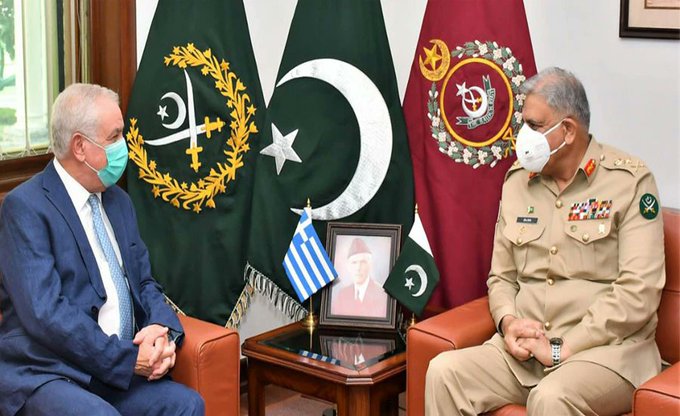 RAWALPINDI :Pakistan is safe for all sorts of international tourism, sports, and business activities, Chief of Army Staff (COAS) General Qamar Javed Bajwa said Tuesday, after New Zealand and England cancelled their tours to the country. The army chief’s comments came during his meeting with Greek Ambassador to Pakistan Andreas Papastavrou at the General Headquarters, the Inter-Services Public Relations (ISPR) said in a statement. “Pakistan is safe for all sorts of international tourism, sports, and business activities, and we encourage healthy bilateral exchanges in all areas of common interest,” the army chief told the Greek ambassador. During the meeting matters of mutual interest, regional security situation — especially the current situation in Afghanistan — and cooperation in various fields were discussed, the ISPR said. The army chief told the ambassador that Pakistan remains committed to cooperating with its international partners for peace in the region and ensuring a stable and prosperous future for the Afghan people. The ambassador appreciated Pakistan’s efforts in controlling COVID-19 through a coordinated national response and hailed Islamabad’s role in the Afghan situation, including the successful evacuation operations and efforts for regional stability, the ISPR added. COAS Bajwa’s remarks come a day after the England Cricket Board (ECB) had announced that it was cancelling its Pakistan following New Zealand’s last-minute decision to pull out due to a “security alert”. In a blistering response to the cancellation of tour by the ECB on Monday, Pakistan Cricket Board (PCB) Chairman Ramiz Raja had said he was extremely disappointed with England. “…it was quite expected as the western bloc gets united in an attempt to back each other, unfortunately. England withdrawal is unjustified, Pak cricket will prevail,” he had said in a video statement. Ramiz Raja had also vowed to get compensation from the New Zealand Cricket (NZC) at all costs in connection with the financial loss the PCB suffered due to the Kiwis pull out of the Pakistan tour.