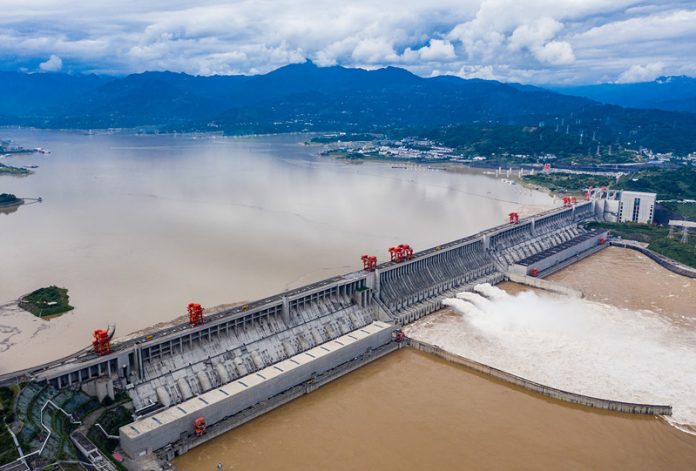 China has constantly improved its ability to safeguard against floods and droughts by applying new technologies to water conservancy projects, including data-based automatic hydrological monitoring, forecasting and warning systems that help governments evacuate residents in time to avoid risks.

Before that, the commission used laser radar installed on helicopters to collect accurate data on the watercourses of the Huaihe River, one of China’s major waterways running through the country’s eastern regions, and scan important flood control facilities on the river, including the Wangjiaba hydrological station and the Linhuaigang Flood Control Project.

China has more than 98,000 reservoirs, over 100,000 sluices, and 9.31 million water supply projects distributed across rural areas. The use of new technologies can effectively enhance the country’s management of water conservancy projects.

“The tap water network of Shanghe county runs for over 2,100 kilometers, and many parts of it are underground pipelines. It used to be troubled by frequent leakage and unstable hydraulic pressure,” said Li Zhao, director of the water supply service center of Shanghe county, Jinan city, east China’s Shandong province.

With 948 water meters installed on water mains of villages, 146,000 smart water meters, and monitor cameras fixed at 183 spots, problems in the management and maintenance of the water network have been effectively solved.

“Every household has a smart ultrasonic water meter that can transmit data remotely through 4G network. The cameras can automatically monitor reservoirs, waterworks and pipelines,” said Li, adding that people can now check information about their water quality, consumption, and bills and report problems about water supply via mobile phone.

A digital platform for flood control and disaster reduction has played an important role in bracing east China’s Zhejiang province for Typhoon In-Fa, known in China as Yanhua, which made landfall in Zhejiang province on July 25.

In an effort to formulate plans as soon as possible for tasks such as eliminating risks and reinforcing the seawalls stretching 2,014 kilometers, preventing waterlogging in coastal cities, and relocating residents that might be affected to safer areas, staff members of the bureau of water resources of Zhejiang province were still working in the small hours of July 24.

As icons of coastlines, rivers, and reservoirs flickered and figures representing precipitation, water level, and water flow changed, risk prompts, warnings and forecasts of risks, such as gaps in seawalls and mountain torrents, were sent out frequently by the digital platform.

“Based on data collected by hydrological stations and calculations and analyses conducted by smart platforms, we can take targeted measures to deal with problems. In the past, we could only work out one plan during an entire morning, while now we can make more than 50 plans a day,” said Chen Zhigang, an official with the flood and drought disaster prevention department of the bureau of water resources of Zhejiang province.

Since the start of this year’s flood season, departments of water resources at all levels in China have been closely monitoring the rain situation across the country. Through a mountain flood disaster monitoring and early warning system, they have accumulatively sent more than 31 million early warning text messages to people in charge of flood control and 740 million messages to residents living in areas threatened by potential hazards, effectively safeguarding the safety of people’s life and property.

As of August 15, 3,103 large and medium-sized reservoirs in the country had stored 78.6 billion cubic meters of floodwater, avoiding flooding for 936 townships and about 820,000 hectares of farmland and relocation of 6.5 million people.