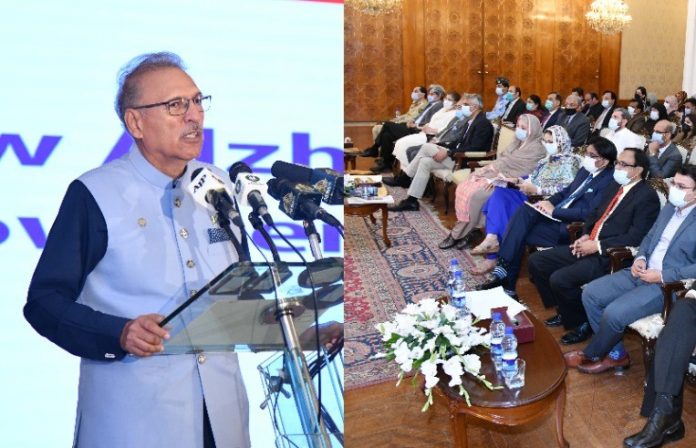 ISLAMABAD: President Dr Arif Alvi on Tuesday said awareness about the needs of elderly opulation and understanding their age-related diseases, such as Alzheimer’s and dementia, was important to make a difference in their quality of life. Addressing at an event to mark World Alzheimer Day, the president said a strong family support could prove one of the helpful means to ease the problems of old persons suffering with such neurological illnesses. President Alvi said coping with the loved ones with Alzheimer’s disease or dementia and watching their memory erode with aging could be a stressful and emotional journey. He stressed that since there was currently no cure for Alzheimer’s disease, proper caregiving could have a positive impact on the patients. He said Alzheimer’s disease acted like a brain plaque and weakened the linkages of brain cells resulting in memory loss. He said mental exercises such as puzzle solving in healthy years helped in risk reduction and delayed the symptoms of dementia. Dr Alvi said setting up of geriatrics units – the healthcare facility for old people, was important, however stressed that inculcating the society with values of caring for the elderly had more significance. He emphasized on sensitizing the society to handle the sufferings of their elders and extending them due care. Special Assistant to the Prime Minister on Health Dr Faisal Sultan said as the old population in the society increased, there was a need to pay attention to their healthcare. He emphasized on training the fresh medical graduates on geriatrics services, and added that such initiative could be taken by the Pakistan Medical Commission at the federal level. Health Minister Punjab Dr Yasmeen Rashid, also the patron of Alzheimer’s Pakistan, said a National Dementia Plan was under consideration to formulate a joint strategy in consultation with all provinces, aimed at facilitating the old patients suffering with the disease. She said early detection of the symptoms of Alzheimer’s could lead to the downhill course of the disease.  She stressed that a strong family support was important to ensure proper caregiving to the patient of Alzheimer’s disease.  Secretary General Alzheimer’s Pakistan Hussain Jafri said the degenerative brain syndromes of Alzheimer’s disease usually started with dementia, loss of memory, disorientation, confusion and problems with reasoning and thinking.  Due to lack of awareness, he said, dementia was often considered as a normal part of ageing, however the disease was a public health priority as declared by the World Health Organization (WHO). At present, he said, there were nearly 0.5 to one million patients of Alzheimer’s disease in Pakistan and the researchers predicted that the population of such patients in Asian sub-continent would  be increased by 500 percent by 2050. He mentioned that Alzheimer’s Pakistan was actively working on raising awareness, training and confirmation of disease.  President Alzheimer’s Pakistan Zia Haider Rizvi said the disease added to the problems of the patients and required special care by the family. Ensuring basic needs of the patients suffering with Alzheimer’s can help them lead a normal life, he added.