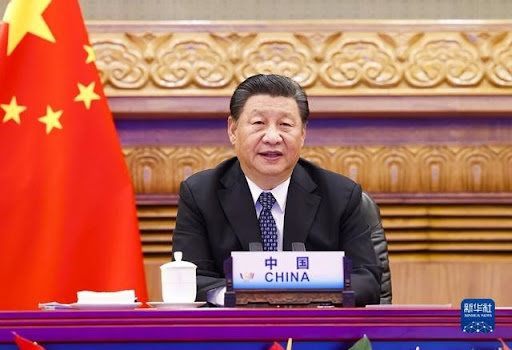 Chinese President Xi Jinping attended the 13th BRICS summit on September 9 in Beijing via video link and delivered an important speech.
On the landmark occasion of the 15th anniversary of BRICS cooperation, China, holding high the banner of building a community with a shared future for mankind, will map out strategies to enhance BRICS cooperation, chart a course for global anti-pandemic cooperation, and guide global recovery.
BRICS countries have grown into a crucial force in the international arena over the past 15 years. At present, COVID-19 is still wreaking havoc around the world. The road to global recovery remains bumpy and tortuous, and the international order is going through profound and complex changes. At this critical moment, the deepening of the BRICS strategic partnership is of global significance and will play a positive role in coping with global challenges, enhancing global governance, promoting global recovery and advancing global common progress.
“Facing these challenges, we the BRICS countries must step forward to make an active contribution to world peace and development and advance the building of a community with a shared future for mankind,” said Xi in the speech, charting a course for BRICS countries to make positive contributions to the world.
He remarked that BRICS countries need to promote the practice of true multilateralism, global solidarity against COVID-19, openness and innovation-driven growth and common development.
He also raised five proposals to further enhance the quality of practical cooperation, including to strengthen public health cooperation in the spirit of solidarity, to strengthen international cooperation on vaccines in the spirit of equitable access for all, to strengthen economic cooperation in the spirit of mutual benefit, to strengthen political and security cooperation in the spirit of fairness and justice, and to strengthen people-to-people exchanges in the spirit of mutual learning. These proposals further enriched the connotation of BRICS cooperation under new circumstances and are welcomed by parties relevant.
Leading anti-pandemic cooperation and pulling together with the whole world, China has showcased its major country responsibility. China has provided vaccines and necessary technical support for countries in need, and has made active contribution to promoting the equitable distribution of vaccines and global cooperation against COVID-19. To date, China has provided more than one billion doses of finished and bulk vaccines to over 100 countries and international organizations, and will strive to provide a total of two billion doses by the end of this year. Xi announced that on top of the $100 million donation to COVAX, China will donate an additional 100 million doses of vaccines to fellow developing countries within this year.
What Xi said was powerful, and reflected the broad mind of the leader of a major country who is concerned with the safety of the world and attaches great importance on the welfare of the people around the world. China’s contribution to BRICS countries and the global fight against the pandemic has been highly praised by the leaders of other BRICS countries.
Conforming to the trend of the times, China is making critical contributions to safeguarding multilateralism and improving global governance. COVID-19 is accelerating the changes in the international landscape. Certain countries use multilateralism as pretext for acts of unilateralism, and meddles in other countries’ internal affairs in the name of democracy and human rights, which has undermined the common interests of relevant countries.
Xi stressed BRICS countries should promote the practice of true multilateralism, adhere to the purposes and principles of the UN Charter, and safeguard the UN-centered international system and the international order underpinned by international law.
The 13th BRICS Summit New Delhi Declaration also reiterated BRICS countries’ support for multilateralism, saying they are committed to promoting the building of a community with a shared future for mankind.
The international society believes that the signal of pursuing a multipole world sent by China has injected positive energy into and stabilized the uncertain world.
Adhering to mutual benefits and win-win results, China is making important contributions to global recovery and common development. Xi raised Chinese schemes from a perspective of common development, stressing BRICS countries need to promote openness and innovation-driven growth to facilitate a steady global recovery. They need to uphold the WTO-centered multilateral trading regime, make sure that the latest outcomes of scientific and technological progress bring benefit to all countries, and push for an economic globalization that is more open, inclusive, balanced and beneficial for all, he noted.
Besides, he said BRICS countries need to promote common development, follow a people-centered philosophy of development, fully implement the 2030 Agenda for Sustainable Development, actively respond to climate change based on the principle of common but differentiated responsibilities, promote the transition to green and low-carbon development, and jointly build a clean and beautiful world.
China’s proposals have not only offered a guidance for global recovery, but also charted a course for making global development more robust, greener and healthier in the post-pandemic era. These proposals vitalized the confidence of countries relevant, especially the emerging markets and developing countries, in escaping the impacts from COVID-19 and accelerating the implementation of the 2030 Agenda for Sustainable Development.
China will take over as the chair of BRICS and host the 14th BRICS summit the next year. It will work with its BRICS partners to comprehensively deepen cooperation in all fields and make contributions to an early victory over the pandemic, economic recovery and world peace, so as to make the BRICS mechanism brim with renewed vigor and vitality.