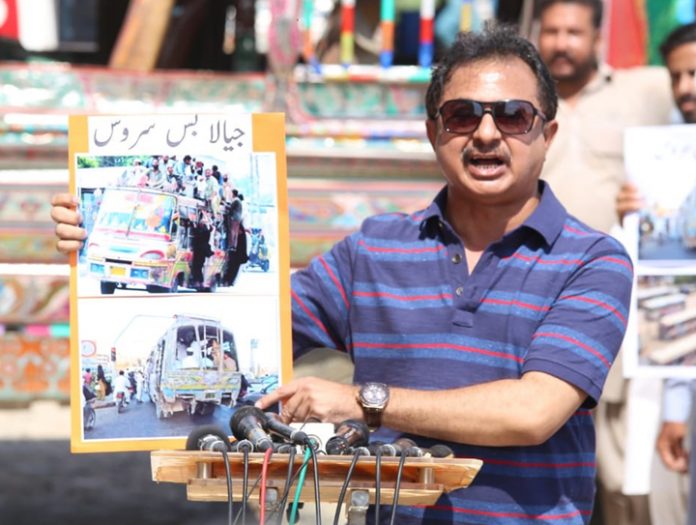 KARACHI: The Central Vice President PTI and Leader of Opposition in Sindh Assembly Haleem Adil Sheikh, Sunday, expressed gratitude to Prime Minister Imran Khan for providing better transport facilities to citizens of Karachi. Haleem Adil Sheikh, to expose the 13 year performance of PPP Sindh government in transport sector, reached Ahsanabad- the starting point of a local transport bus route- and traveled in “W-11” along with citizens. PTI workers also staged a token protest by holding pictures of worn out crumbling buses run by Sindh government in Karachi. Speaking at the occasion Haleem Adil Sheikh said that 40 buses have reached at Karachi and PTI’s promise of Green Line Bus Service is turning into realty. People of Karachi would get rid of crumbling shaky buses thanks to federal government that would not leave Karachiites on the mercy of inefficient Sindh government, he added. Inauguration of Karachi Circular Railway (KCR) is expected in a few days while completion of mega water supply project K-IV would be another gift by PTI government to Karachi, he said. Sindh government during its 13 year rule in the province claimed to spend Rs. 1161 billion on transport sector and construction of roads while Rs.3.11 billion were earmarked in Budget 2020-21, Haleem Adil said adding that in the current financial year 2021-22 further Rs.6.46 billion were allocated for the purpose but all the projects remained limited to mere announcements and no change could be seen across the province. The 3.9 kilometre Orange line, the shortest section of Bus Rapid Transit System (BRTS) in Karachi, was inaugurated on June 11, 2016 with estimated cost of Rs.1.14 billion but despite passage of over four years the project was incomplete, Haleem stated. Red line- a 27 kilometer section from Malir Halt to Namaish- and another section from Namaish to Tower were still awaiting completion, he said. Yellow line is another abandoned project under which 104 new buses were planned to be inducted in local transport system, he informed elaborating that agreement in this regard was inked with a Chinese firm in 2016 and Sindh government has to provide 30 percent of total project cast while remaining 70 percent was to be provided by the Chinese firm. Sindh government did not provide its share and work on the project stalled, he stated. Haleem Adil Sheikh said that Sindh government announced a project of plying 1000 buses on 40 different routes in Karachi in year 2019 which could not be materialized while Peoples Bus Service was another failure that ended in pilot stage within four months. Haleem Adil Sheikh said that a 600 buses project named after Shaheed Benazir Bhutto met the same fate while announcement of running electrical buses just remained an announcement and not a single bus was being operated by Sindh government. Even data was not available on website of provincial transport department, he added. In the provincial capital of Sindh better transport facilities were available to citizens till 1990 but a recent report of Bloomberg ranked Karachi as the worst local transport system among 100 mega cities of the world, Haleem Adil Sheikh mentioned. PPP has plundered the national Exchequer ruthlessly and people of Sindh were deprived of even the basic facilities, Haleem Adil alleged adding that 50 new CNG buses were imported in 2007 with estimated cost of Rs. 250 million but PPP government through a fake auction sold the buses to their party leader at a meager price.