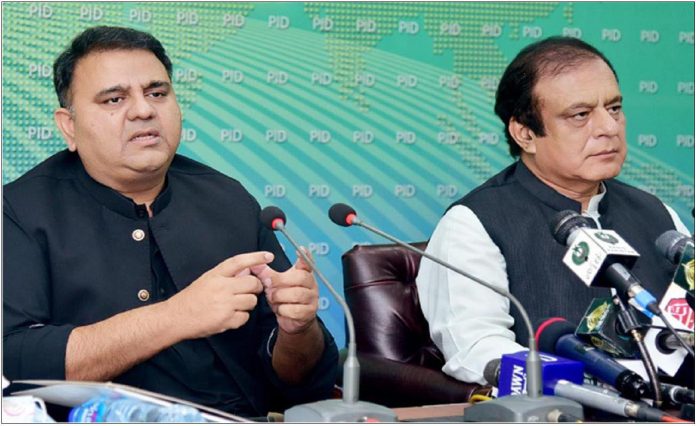 ISLAMABAD: Federal Minister for Information and Broadcasting Fawad Chaudhry has said that the 2023 general elections will only be held after electoral reforms take place. Addressing a press conference in Islamabad on Sunday alongside Minister for Science and Technology Shibli Faraz, Chaudhry continued his criticism of Chief Election Commissioner (CEC) Sikandar Sultan Raja, saying that he should resign and join politics if he cannot steer clear of controversies. It bears mentioning here that Fawad’s remarks came despite the Election Commission of Pakistan (ECP) sending legal notices to Chaudhry and Minister for Railways Azam Swati for allegations levelled against it. Chaudhry, today, accused the CEC and Opposition of creating hurdles in the way of electoral reforms. “A campaign is being run against EVMs,” he said, adding that the CEC and the Opposition “are speaking the same tongue”. “The way the ECP raised objections on the EVMs, it reflects a particular mindset,” said Chaudhry, going on to state that the CEC is against EVMs “under some agenda”.The minister said that the objections raised on the use of electronic voting machines (EVMs) were raised “deliberately” and only 10 out of the Election Commission of Pakistan’s (ECP) 37 objections were related to the EVMs. He accused the ECP of “disappearing” all points in its report that were in favour of EVM. Chaudhry also questioned the CEC’s absence in meetings attended by the president., saying that “this is not a banana republic” for him to behave this way. “He doesn’t bother about the Supreme Court, the president of Pakistan, National Database and Registration Authority, or anything, if he is not in a good mood,” the minister alleged. The minister said that it is the first time in Pakistan’s history that the government is speaking about bringing election reforms, as in the past it was always the Opposition that talked about it. “The reforms introduced by the government have increased the people’s trust in the voting process far beyond the previous 33% and everyone agrees that the current election system needs reforms,” said Chaudhry. He reiterated that PTI has always supported electoral reforms and EVMs because they want unbiased and fair elections. Chaudhry asked the Opposition and ECP to put forward their suggestions for reforms if they don’t accept the ones introduced by the government. He added that the government will ask two members of the ECP to step forward and review the points raised by CEC Raja in the ECP report.