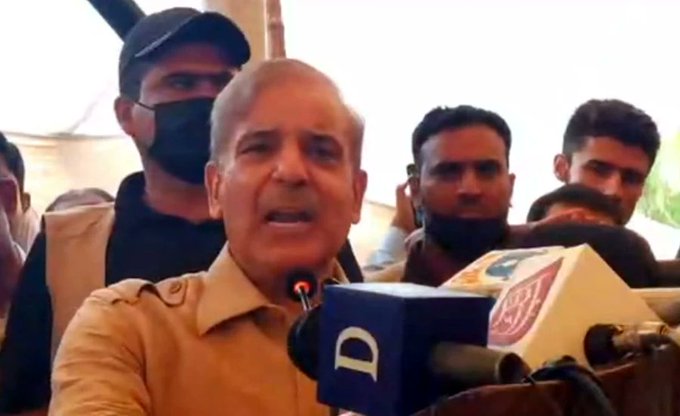 ISLAMABAD:PML-N President and Leader of the Opposition in the National Assembly Shahbaz Sharif on Saturday said the September 12 cantonment board elections spelled the “death of PTI’s politics”.”The cantonment board is the place where PTI was born, and it lost the elections there — marking the death of its politics,” the PML-N president said, while addressing a workers convention in Sialkot. Shahbaz said a “majority” of the voters in Punjab had opted for the PML-N. “PTI is installing its plaques on the projects of PML-N […] they talk about establishing the ‘state of Madina’, but their actions are the opposite,” he said. The Opposition leader said people had voted for PML-N “in line with their conscience”, in response to the PTI’s policies. “In the last three years, people have been burdened with surging inflation.” “There is no doubt that there was no interference in cantonment board elections,” Shahbaz said, claiming that people were recalling the time of PML-N supremo Nawaz Sharif when medicines were provided for free in hospitals. Reminding the prime minister of his earlier statements, he said: “PM Imran Khan used to say that if the dollar goes up, even by a rupee, then the prime minister is corrupt; if the electricity bills witness a rise, then the prime minister is corrupt.He regretted that despite being a nuclear power.
, “Pakistan roams about with the begging bowl in its hand”.The PML-N president said the price of 1kg sugar had stayed below Rs52 during their tenure, while the current regime has taken the rate to Rs108-110. “In three years, sugar worth billions of rupees has been imported […] the economy, in their hands, has been destroyed.” Shahbaz claimed PML-N would win the next general elections, demanding that the polls be held in a free and fair manner. “If the elections are not held in this manner, then we will go the legal route, which is our right.” The PML-N president said the country is “in need of rule of law and of civil supremacy”.