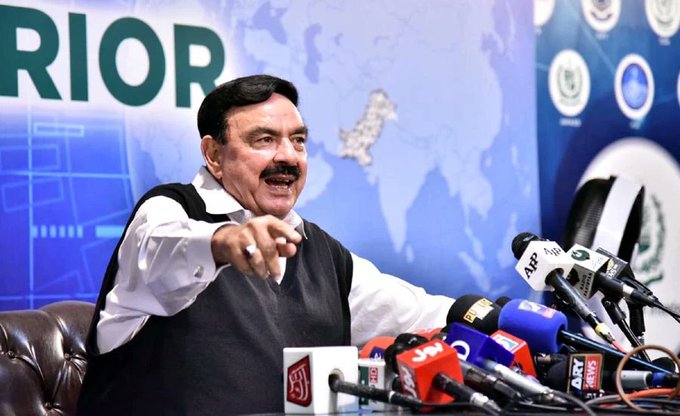 ISLAMABAD: The New Zealand authorities do not have substantive proof of threat in Pakistan, Federal Minister for Interior Sheikh Rasheed said Friday, hours after the Kiwis cancelled their tour of Pakistan. Rasheed, addressing a press conference in Islamabad, said New Zealand took a unilateral decision to cancel the Pakistan tour despite the country’s tight security arrangements for the team. The federal minister’s press conference comes following New Zealand Cricket’s decision to cancel its tour of Pakistan citing a “security alert”, a statement from the Pakistan Cricket Board (PCB) had said. “Earlier today, New Zealand Cricket informed us they had been alerted to some security alert and have unilaterally decided to postpone the series,” the PCB had said. The New Zealand authorities did not have any evidence to support their claim as the Pakistan army, security forces, and 4,000 police personnel were deployed for the Kiwis’ security, the interior minister said. Rasheed said Pakistan had proposed holding the matches without spectators, but the New Zealand authorities did not agree to that. Following this, the Pakistani officials spoke to Prime Minister Imran Khan — who is currently in Tajikistan. “The prime minister was briefed on the matter. He then called New Zealand Prime Minister [Jacinda Ardern] and assured her that there was no security threat,” the interior minister said. Responding to PM Imran Khan, New Zealand prime minister said there were reports that the team might be attacked once it steps out of the hotel, the interior minister said. “They took a unilateral decision to cancel their tour,” he said, adding that no security institution of Pakistan had received reports of threats to the New Zealand cricket team. The interior minister said the unilateral decision comes as Pakistan is playing a crucial role in establishing peace in the world. “The country has strong institutions which have fought terrorism.” “The tour has been cancelled on the basis of a conspiracy. This is their [New Zealand’s] problem. The National Crises Management Cell and other institutions had tried to convince them, but New Zealand’s government has taken a unilateral decision,” he said. Rasheed, in response to a question, said it was not suitable to name the conspirators, as he noted that Pakistan has die-hard cricket fans who wish to see the sport take place on their home ground. “This conspiracy has been hatched to tarnish the image of Pakistan, as its image was going to build up due to the role it is playing for peace in the region,” the interior minister said. Talking about Afghanistan, he said Pakistan’s borders — Chaman and Torkham — with Kabul were peaceful and security forces were making sure the situation remains the same. “We have evacuated the US, Turkish, Greek, German, and Japanese citizens from there,” the interior minister said, talking about Pakistan’s efforts in the evolving Afghan situation. The interior minister said Pakistani students — men and women — were going back to Afghanistan to continue their studies. Rasheed noted that if someone wants Afghanistan to turn into a Scandinavian country, then they are at fault, as Kabul progress at its own pace. Responding to another question, he said a New Zealand-approved security team had reviewed the security situation in Pakistan four months back — three months before the Taliban took over in Afghanistan. “None of our intelligence agencies had any information about a threat. Pakistan is playing a major role in the region and they do not want us to prosper.” The interior minister said Indian media was “defaming Pakistan”, as he vowed that Islamabad — which aspires for peace — would foil all of New Delhi’s designs. New Zealand will hear Pakistan at the International Cricket Council (ICC), the country’s cricket board chief Ramiz Raja had said Friday earlier in the day as he reacted to the cancellation.  “Walking out of the tour by taking a unilateral approach on a security threat is very frustrating. Especially when it’s not shared!!” the PCB chairman lashed out at New Zealand Cricket.