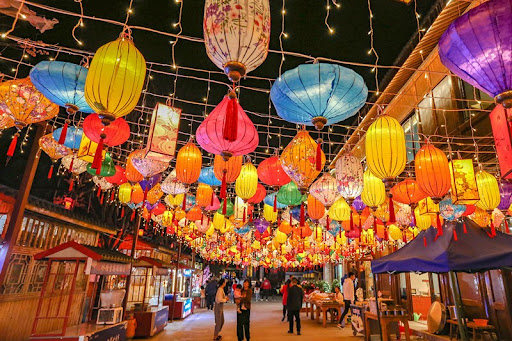 By Lin Lili, Zhou Haixiang, People’s Daily
Night-time economy, now a significant part of urban commerce, demonstrating a city’s characters and dynamism, is also an important barometer for a city’s economic vitality.
A report issued by the Ministry of Commerce this July said that 60 percent of consumption took place at night. The turnover of some major shopping malls between 6:00 pm and 10:00 pm accounted for over half of their daily sales volume.
Statistics showed the Chinese night-time economy exceeded 30 trillion yuan ($4.64 trillion) in 2020 and is expected to expand to 36 trillion yuan this year.
At the 2021 Beijing Catering Brand Conference held during the just-concluded China International Fair for Trade in Services, the Beijing Municipal Commerce Bureau announced the operation of 10 featured night markets in Beijing and launched a dynamic map for the capital’s consumer services for better development of the nigh-time economy. It marked a second time for the Bureau to announce featured night markets in the city.
Many Chinese cities have developed mature business models of the night-time economy. For instance, a batch of nightlife areas have been built in Shanghai, which are international and trendy and feature Shanghai’s local characters. Xi’an in the northwest province of Shaanxi launched a series of night tour activities to build the culture of the Tang Dynasty (618-907), during which Xi’an was the capital, into a signature of its tourism.
Besides, cities in China have also tailored their own “golden signboards” for night-time economy, such as the light shows above the Yangtze River in Hubei’s Wuhan, and the scenic belt featuring the Qinhuai River and Fuzimiao, or what’s known as the Confucius Temple, in Nanjing, east China’s Jiangsu province.
The night-time economy covers a wide range of businesses and diverse consumption scenarios, including business types that hold dear both day and night operation, such as restaurants and malls, as well as those that generally welcome only late-night customers, such as pubs and karaoke bars.
In addition, the nigh-time economy is also seeping into the culture and sports sectors, building a series of featured products related to fitness, concerts, art exhibitions, and late-night book stores.
As residents’ living standards embrace a constant rise, more and more consumers start to value cultural consumption that can delight themselves, broaden their horizons, and build their bodies. To cater to the upgrading demand of consumers, local authorities are working to improve the quality of the night-time economy.
In April this year, Tianjin municipality issued a plan on night-time economy development to expand night-time consumption scenarios and improve the performance of demonstration nightlife areas. It said the city would support art performances, music festivals, immersive theaters, and talk shows in nightlife areas.
In May, Jiangsu province’s Suzhou issued cash coupons to consumers to boost consumption in theaters, book stores, and gyms and better meet residents’ demand for high-quality night-time consumption.
In June, 30 physical book stores in Shanghai jointly launched a night-time reading campaign covering themed book exhibitions, cultural lectures, book launches, and family activities. It has significantly vitalized the cultural and tourism industry and brought book aroma to the night-time economy.
“China enjoys huge market potential in the development of the night-time economy. The traditional business forms such as catering, shopping, and night tours are far from enough for the demand of consumers, while the leisure, culture, and health sectors are gradually becoming important parts of the night-time economy,” said Dai Bin, president of China Tourism Academy.
He added that Chinese cities should create new night-time economy businesses, services, and products to further advance the night-time economy.