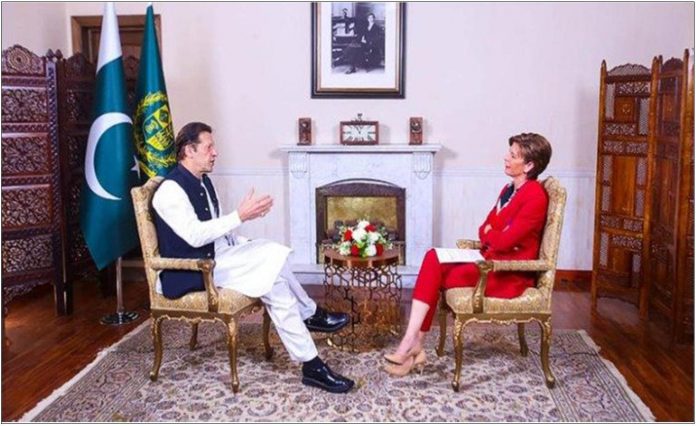 ISLAMABAD: Prime Minister Imran Khan on Wednesday said that in order to achieve peace and stability in Afghanistan, the world should “engage with the Taliban” and they should also be “incentivised” on issues such as inclusive government and women’s rights. The premier was interviewed by an international news channel on Wednesday at his Bani Gala residence in Islamabad, during which he spoke about the situation in Afghanistan, the role of Pakistan in fostering regional peace, and the country’s relationship with the United States. Per the outlet, PM Khan said that Pakistan had to endure a “terrible” relationship with the United States which turned out to be disastrous for Pakistan. He added that the country, under his leadership, is now seeking a “more pragmatic approach in dealing with Afghanistan’s new leaders.” The premier told the outlet that Afghanistan is on a “historic crossroad” and it could finally achieve peace after 40 years if the incumbent Taliban government could form an inclusive government by getting all the factions on board. “But if it goes wrong and which is what we are really worried about, it could go to chaos. The biggest humanitarian crisis, a huge refugee problem, and the reemergence of terrorism ” he said, adding that since Afghanistan is undergoing a critical situation, the Taliban regime is looking towards the world for aid. “[The provision of aid] could be used to push the group towards the right direction and legitimacy.he said, stressing that the country should remain sovereign and should not be controlled by outside forces. “No puppet government in Afghanistan is supported by the people,” he said. “So rather than sitting here and thinking that we can control them, we should incentivise them. Because Afghanistan, this current government, clearly feels that without international aid and help, they will not be able to stop this crisis. So we should push them in the right direction.” The premier also said that had the Taliban taken over Afghanistan by military force, a civil war would have ensued, adding that Pakistan was scared of such repercussions as it would have become the biggest sufferer. He said that since the Taliban have taken control of the country, the world should “give them time” so that they could deliver their promises and form a legitimate government.