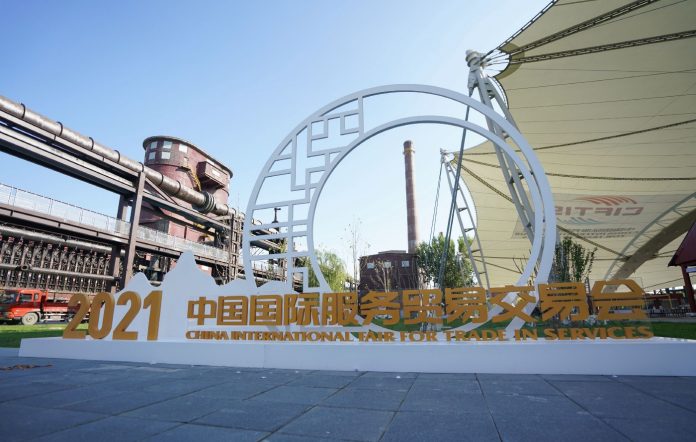 “While the conference & exhibition industry is slowly recovering, with a lot of uncertainty around the world, China International Fair for Trade in Services (CIFTIS) 2021 is an important signal and vote of confidence in this sector, which contributes to local and regional economies as well as the global economy.” Robin van Puyenbroeck, Executive Director-Business Development of World Trade Centers Association (WTCA) told People’s Daily in a recent written interview.

Extending congratulations on the opening of CIFTIS 2021, Puyenbroeck said that it is very significant to hold such a large-scale expo amidst the COVID-19 pandemic and a demonstration of China’s confidence on effective pandemic control.

This is the second time for Puyenbroeck to attend CIFTIS since he took the position of Executive Director-Business Development at WTCA last year. From his point of view, the world is entering a new phase of “digital globalization”, and the theme of this year’s CIFTIS, “Towards Digital Future and Service Driven Development”, is an excellent way to summarize some of the major trends of global trade in the post-pandemic era. “Without any doubt, the theme is very much in line with the global development and digitization trends that accelerated during the pandemic.”

For the past seven years, China has been the second-largest country in trade services. Due to the numerous restrictions on the movement of goods and people during the pandemic, the global volume of trade in services was in a slump and China was no exception. However, Puyenbroeck expressed his confidence in Chinese service trade sector: “China’s growth in service trade had been quite steady throughout the pre-pandemic years, and I see no reason why that pace of accelerated growth would not pick up again.”

Puyenbroeck also stressed that China has some of the most successful digital technology enablers in different areas, which gives it a competitive edge in digital globalization and could become one of the core competitive factors for China in global trade.

Last year, Chinese President Xi Jinping stated at the UN General Assembly that China aims to have CO2 emissions peak before 2030 and achieve carbon neutrality before 2060. “Action on climate change is urgently needed, and the fact that CIFTIS assigns great importance to it is a meaningful step forward and of great symbolic significance.” Puyenbroeck spoke highly of the integration of the concepts of carbon peak and neutrality into this year’s CIFTIS.

Puyenbroeck deeply appreciated the development of China in the past four decades, comprehending it as phenomenal in history. “China has lifted 770 million of its people from poverty and greatly improved the living standard of the population.” He believes that China’s view on open trade policy and accession to the WTO have played a critical role in this development. “We see it is very positive that China has made major headway in multilateral and bilateral trade and investment agreements such as with the signing of RCEP and the completion of the negotiation for EU-China investment agreement last year.”

The WTCA is participating in both CIFTIS and China International Import Expo this year, both of which are excellent access to the vast Chinese market. As a firm supporter to free and fair trade, the WTCA advocates for a global trade infrastructure inclusive for all, as China takes a leading role in stabilizing global trade relations between all major trading blocks. Puyenbroeck has firm confidence in China’s role in the global trade, “the world counts on China’s support for inclusive reform of the global trade infrastructure, especially at the WTO, so that the system can work for everyone, and create prosperity and stability for everyone around the world.”