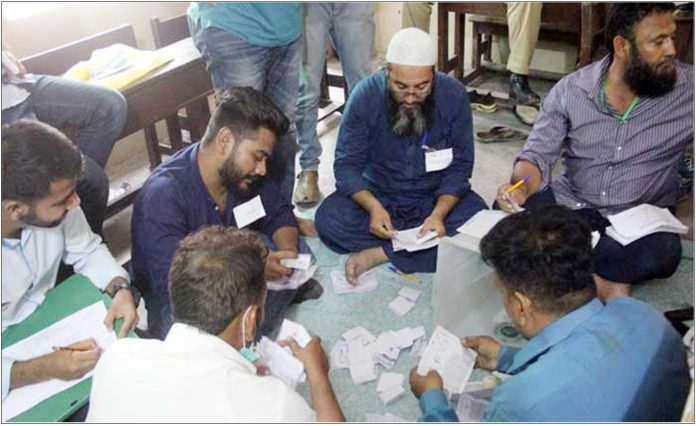 KARACHI: Counting of votes across Pakistan in cantonment board polls is underway with more than half of the results in. According to the unofficial results, PTI is in the lead with 49 seats, followed by independent candidates who have won 42 seats. Among the Opposition parties, PML-N has won 31, PPP has won 12, and the Jamaat-e-Islami has won two. A total of 1,569 candidates stood for elections in 219 wards of 42 cantonment boardsOf the candidates vying for a total 219 wards, seven candidates have already been elected unopposed. In addition, there is no competition in four wards of Kamra, none in one ward of Rawalpindi and none in one ward of Pano Aqil. Therefore, polls today were held in 206 wards. The polling process started at 8am and continued till 5pm. Voters inside the polling station were able to cast their votes despite polling time ending. The gates were closed for those queued outside. Despite results across all wards not being complete, parties began claiming support shown by people and declaring victory. PML-N President Shehbaz Sharif thanked God and the people who had shown the party support through their votes in the polls. “We assure the people that we will not disappoint them and will leave no stone unturned in resolving their hardships and issues,” he said. “We will take the country on the path to development, progress and prosperity with renewed vigour. InshaAllah,” he added.
PPP’s Murtaza Wahab, meanwhile, declared victory in several wards of Karachi’s Clifton Cantonment Board. He claimed the party has won for the first time from polling stations of PNT Colony in Ward 10 of the Board.